Man nears 50 jobs in 50 states goal
A Brockton, California man on a mission to work a different job in each of the 50 states said he has reached the 45-state marker in Massachusetts as a first base coach.
Daniel Seddiqui, 27, who set off on his 50-state quest after graduating with a degree in economics and failing to gain a job from 40 interviews, said he is working this week as first base coach for the Brockton Rox baseball team and next week he'll be working for the Democratic Party in New Hampshire, WCVB-TV, Boston, reported Wednesday.
"I just left my driveway with no money. I was negative $65,000 from school loans and I bought my car right before I left. And, just made it all work. I had no other options," Seddiqui said. "I've probably made from $50,000 to $60,000 this year. And I have saved all of it. Three thousand dollars in one week when I was in Minnesota medical device manufacturing. And the lowest is probably $100, but I was working with Amish people building furniture."
.
Woman buys the complete business class for her pooch
Unwilling to fly without her pooch by her side, an Israeli woman purchased the entire business section of an El Al flight from Paris to Israel.
The woman identified as Rivka, told the Channel 10 television network Wednesday afternoon, she could not bear the thought of her eight-year-old boxer dog being placed in a cage in the cargo hold of the plane for the duration of the flight.
"He is my baby, and I asked El Al to rent out the business section and paid $32,000 to ensure my dog, Or (light in Hebrew), would be able to sit next to me for the entire flight," she told the television.
Rivka said it is the first time the two have flown since 2006. In the past her pet suffered from severe anxiety after flying alone in the cargo section, she said. This time she decided to purchase the entire business section of the jetliner and enjoy the dog's company for the four-hour flight from Paris to Israel.
.
Bark at a dog and it might bite you back. Or get you arrested.
That's what happened to a 26-year-old man who was arrested by Three Rivers police for allegedly barking at a police dog.
The incident occurred Monday evening while a police officer was investigating a suspicious situation at an apartment complex, according to a Three Rivers Police Department press release. The officer left his canine companion, Anija, in his patrol car, police said.
The man, who was outside the building, approached the vehicle. He began ``to torment the police dog by barking and shouting at the animal,'' causing the dog to become ``excited and very aggressive,'' police said.
The man was arrested for harassing a police animal and was released on bond. He is facing charges of disorderly conduct.
.
Posted by The Man at 11:31 AM No comments: 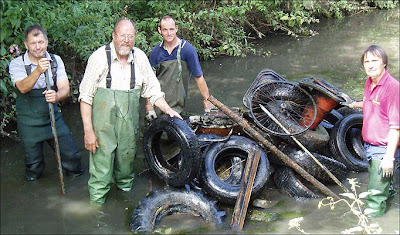