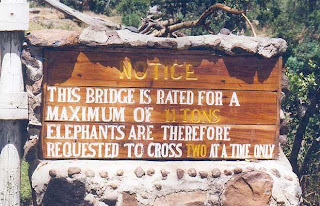 Elephants take note
Even pachyderms have to follow regulations. 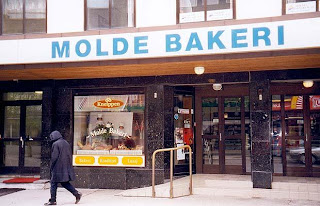 Now here's a good name for a bakery, or 'bakeri', as it's called in Norwegian. At first glance they seem to be boasting mildewed muffins or fungal French bread, but Molde is, in fact, the name of this west coast Norwegian town. 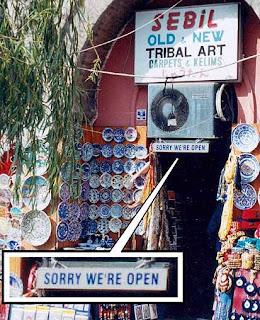 Apology accepted
Posted by The Man at 3:44 PM No comments:

At least the dog understands.
Posted by The Man at 12:20 PM No comments:

Have you ever have the feeling that you're being watched? 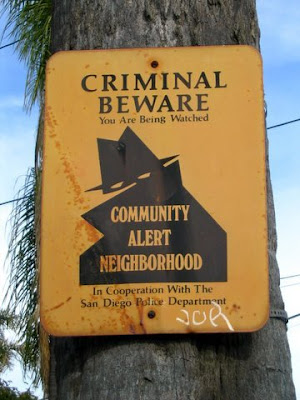 Absent minded pilot strands family on island
The budget airline easyJet has agreed to pay nearly £1,750 compensation to a family who were stranded in the Canary Islands after their flight home was cancelled.
Nicola and Robert Starkie had been to a friend’s wedding with their two young daughters. When they arrived at the airport in Las Palmas on Grand Canary after their week-long break they were told that the pilot had forgotten to renew his licence to fly.
The couple and four other relatives were among 25 passengers who could not be placed on the next available flight. They were told that they would have to wait five days for a flight home and even then could not be guaranteed a seat.
To add insult to injury the airline told them it would pay for hotel accommodation for only two nights, leaving them to fend for themselves.
.
Postcard arrives after 79 years
A couple have become the unwitting recipients of a postcard delivered 79 years after it was first posted.
Arthur Davies and his partner June Nicolopolous received the item at their home address at Lacon Road, East Dulwich, on Thursday lunchtime.
It was addressed to a Mr & Mrs Richardson, date-marked 1929 and posted from Burnham-on-Crouch, Essex.
The Royal Mail said it was difficult to "determine exactly" what happened to the postcard for all this time.
He said they would keep the letter in the hope that a relative may claim it back.
A Royal Mail spokesman said: "It is impossible to determine exactly what has happened to this item of mail.
"It is very unlikely, however, that it has been in the Royal Mail system for that length of time.
"The most likely explanation is that the item has been re-entered into our postal system and then delivered to the correct address."
.
Mexico Fines U.S. Drivers Seeking Cheap Diesel
A Mexican border city has begun fining U.S. drivers who cross the border to fill extra drums, tanks or barrels with government-subsidized Mexican fuel.
The city of Ciudad Acuna, across the border from Del Rio, Texas, said Friday that it fined four U.S. residents for carrying extra diesel and would impound their cars until they pay. The fines equal 70 percent of the value of the diesel confiscated.
U.S. drivers can fill up their own vehicles, but carrying extra fuel containers back across the border violates customs regulations and possibly safety rules, a report from the city said.
Mexico, one of the world's top 10 oil producers, sells diesel fuel domestically at subsidized prices of about $2.25 per gallon, about half the U.S. price.
Mexican filling stations near the U.S. border have seen an increase in American drivers who cross over to fill up. Mexican truckers and drivers complain the run on fuel is causing temporary shortages and longer lines for them.
.
"Why did the chicken cross the road?"
Jerry Sleater finally has an answer to the age-old question, "Why did the chicken cross the road?" Because someone tried to steal it.
The 76-year-old went outside Thursday morning to get his newspaper when he saw Rudy lying down on the side of East Badger Road south of Kennewick.
Rudy is a 5-foot, 400-pound metal rooster that's been painted bright blue and has been perched at the edge of Sleater's property for about two years.
NEWS VIDEO and More
.
Hunt for parrot's owner
The RSPCA is looking for the owner of a talkative parrot that likes to say "I love you" and "give us a kiss". The stray male African grey was found perched in a tree in Gunness, near Scunthorpe, North Lincolnshire, on Wednesday, said the animal charity. Animal collection officer Tim Stoodley has taken the parrot in while he searches for its owner. He said the bird slides along his arm and says "hello" and has a tendency to bite him and then say "ouch". "He always gives me a good morning and a goodnight. He also says 'give us a kiss' and makes kissing noises."
It is thought the parrot must belong to someone in the Gunness or Scunthorpe area as it is unlikely to have flown much further. And Mr Stoodley believes the owner could be a woman. "It's got quite a feminine voice and it likes my girlfriend, but hates me," he said.
Posted by The Man at 12:07 PM No comments: