CHICAGO — Jubilant workers, cheering and chanting "Yes We Can," celebrated outside a Chicago factory after approving a $1.75 million agreement to end their six-day sit-in, which had become a nationwide symbol of the plight of labor.
Republic Windows & Doors, union leaders and Bank of America reached the deal Wednesday evening. Workers carrying sleeping bags left the North Side factory within hours.
About 200 of 240 laid-off workers began their sit-in last week after Republic gave them just three days' notice the plant was closing. The workers had argued that Republic violated federal law because employees were not given 60 days' notice. They vowed to stay until they received assurances they would get severance and accrued vacation pay.
Each former Republic employee will get eight weeks' salary, all accrued vacation pay and two months' paid health care, said U.S. Rep. Luis Gutierrez, who helped broker the deal. He said it works out to about $7,000 apiece.
"We lost the jobs but we got something," said Lalo Munoz, who worked at the plant for 24 years.
Gutierrez, an Illinois Democrat, said $1.75 million will go into an escrow account for the workers, $1.35 million of which came from Bank of America in the form of a loan to Republic.
.
Posted by The Man at 2:56 PM No comments: 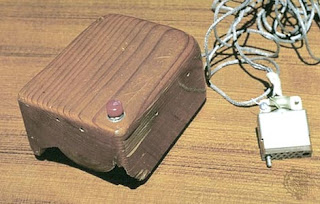 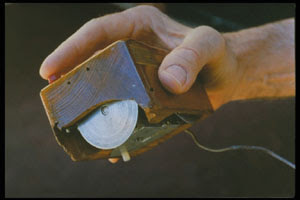 Believe it or not your mouse is 40 today! (12-9-08) Looking like something that could take your fingers clean off, the wooden block with a single red button on top was unveiled to the world 40 years ago. Douglas Engelbart invented the mouse and worked with Bill English to build the device.
.
Posted by The Man at 2:52 PM No comments:

Parent's plan to protest the ban of tinsel 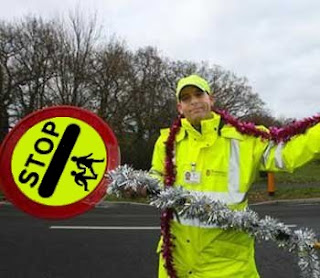 Parents are planning to stage a banner-waving protest in a bid to put the Christmas sparkle back on to a Hampshire school crossing patrol officer’s lollipop.
As revealed in yesterday’s Daily Echo, Kevin Simpson, pictured, was ordered to remove tinsel from his lollipop for health and safety reasons after an anonymous passer-by complained to bosses. Now parents, incensed over the ban, are set to stage a demonstration on Friday, near the Maunsell Way crossing, in a bid to get the yuletide sparkle put back.
The 45-year-old lollipop man says that support from parents at Hedge End’s Berrywood Primary School has been growing.
He said: "Passing motorists have also been hooting their horns in support. I think councils should give a little bit of leeway during the festive season.
"It is just a fun goodwill gesture and on these miserable winter mornings it does light up the children’s faces."
If the tinsel ban is not lifted, Kevin says that he plans to put tinsel round his neck and the lollipop on the last day before the school breaks up for Christmas.
.
Posted by The Man at 2:45 PM No comments: