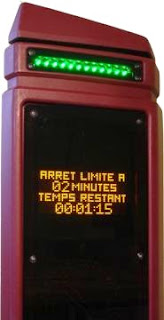 You are shopping when you receive a text message on your mobile phone. It is from the parking meter to tell you that you have been given a fine.
The meters create magnetic fields capable of registering the metal mass of vehicles. They have a direct computer link to a police station.
Under a mechanism adopted by towns such as Issy-les-Moulineaux on the outskirts of Paris, cars are allowed 20 minutes of free parking. If they stay longer, the smart meter sends a message to a police control room, which alerts officers through their mobile telephones a quarter of an hour later.
"That way police and wardens don't have to spend the day walking up and down the road," said Mr Zandona, who said he wanted to introduce the technology to Britain and a number of other countries.
"The police can go and sit in a café if they like and just pop out when they get a message to say a car is parked illegally. They have an 80 per cent chance of finding the car still there between 12 and 18 minutes after the limit, we have found. That's why we warn them after 15 minutes."
.
Posted by The Man at 2:02 PM No comments:

Vehicle towing must be has big or be bigger then vehicle being towed.
Click to Enlarge 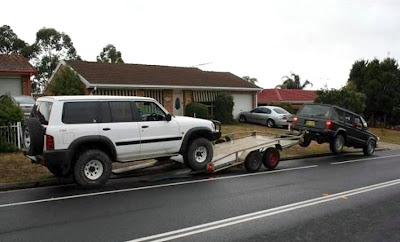 .
This reminds me of the old TV commercial putting 2 tons of fertilizer in a 1 ton truck.
.

Labels: Not Using Their Brain, Vehicle 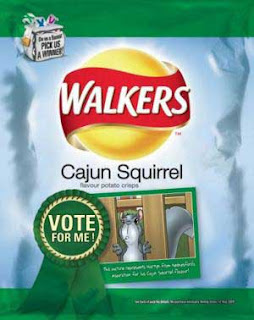 .
.
Walkers launches new line of crisps after competition to find taste of 21st century
Irked by cheese and onion? Dispirited by prawn cocktail? Bored with ready-salted? Well, why not reach for a bag of Cajun squirrel-flavored crisps? Or perhaps you'd like to try chilli and chocolate.
From today, jaded snackers will be able to choose from six wacky new crisp flavors – which also include crispy duck, onion bhaji, fish and chips and builder's breakfast – following a competition the snack giant Walkers organized to find a 21st century rival to our old favorites.
The most popular pack will go into full-time production after a public vote ends in May.
.
Posted by The Man at 1:53 PM No comments: