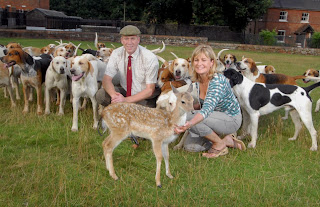 Are You My Mommy?
The dogs immediately accepted the lost deer when they found him shivering by the Thompsons' front gate just an hour or so after he had been born.
'We can't release him into the park here because there are too many people about. Bam Bam is not afraid of humans and we're worried that this may make him dangerous.
'He already gives us a nudge when he wants to eat and it's not so bad because he's only little but imagine what a nudge could do when he's got a fine pair of antlers.'
The Thompsons will be sad to lose such a treasured member of the family but they know they can't keep him forever and plan to set him free once he's fully grown.
Next year they intend to rehome Bam Bam in a private park where he will be able to join a herd and finally learn how to be a deer.
Posted by The Man at 3:03 PM No comments:

Scientists say they are a step closer to developing materials that could render people and objects invisible.
Researchers have demonstrated for the first time they were able to cloak three-dimensional objects using artificially engineered materials that redirect light around the objects. Previously, they only have been able to cloak very thin two-dimensional objects.
The findings, by scientists at the University of California, Berkeley, led by Xiang Zhang, are to be released later this week in the journals Nature and Science.
The new work moves scientists a step closer to hiding people and objects from visible light, which could have broad applications, including military ones.
People can see objects because they scatter the light that strikes them, reflecting some of it back to the eye. Cloaking uses materials, known as metamaterials, to deflect radar, light or other waves around an object, like water flowing around a smooth rock in a stream.
Metamaterials are mixtures of metal and circuit board materials such as ceramic, Teflon or fiber composite. They are designed to bend visible light in a way that ordinary materials don't. Scientists are trying to use them to bend light around objects so they don't create reflections or shadows.
It differs from stealth technology, which does not make an aircraft invisible but reduces the cross-section available to radar, making it hard to track.
Posted by The Man at 2:54 PM No comments:

Famous Stone Arch Collapses in Utah Park
One of the largest and most photographed stone arches in Arches National Park in Utah has collapsed.
Wall Arch fell sometime late Monday or early Tuesday, though no one has reported seeing it collapse, said Paul Henderson, the park's chief of interpretation.
He said the arch, located along the popular Devils Garden Trail, was claimed by forces that will eventually destroy other arches in the park: gravity and erosion.
Measuring more than 33 feet tall and 71 feet across, Wall Arch ranked 12th in size among the park's estimated 2,000 arches. It was first reported and named in 1948.
PICTURES and More
.
Spilled Cash Starts Free-for-All
Police near Los Angeles say motorists stopped in speeding traffic to gather up bills Sunday after a man on a Harley-Davidson motorcycle dropped a bag of cash.
They took off when the California Highway Patrol arrived.
The biker told authorities a computer bag he was carrying ripped and spilled money across Interstate 10, where people were driving in 65 mph traffic.
Highway Patrol Officer Anthony Martin says he doesn't know how much cash was in the bag or how much drivers made away with.
.
What’s Your Favorite Flavor of Ice-cream
The city of Yokohama has marked the 130th anniversary of the arrival of ice cream in Japan with a festival showcasing exotic regional varieties including beef tongue, eel, raw horseradish, curry, crab and potato.
More than 125 varieties of ice cream have been available in the two week festival, including cheese, octopus, prawn and a garlic variety called Dracula Premium Ice. Another favourite was flavoured with very finely sliced pieces of pearl from the traditional pearl-growing region of Japan's inland sea. Most were selling for between Y300 (£1.42) and Y800 (£3.78) for a small tub.
The majority of the ice creams were clearly acquired tastes, including the beer version, which failed to recreate either the taste or texture of beer.
.
Posted by The Man at 7:51 AM No comments: