Not quite what you think.
Very funny.
Posted by The Man at 5:48 PM No comments:

That Sure Looks Good! 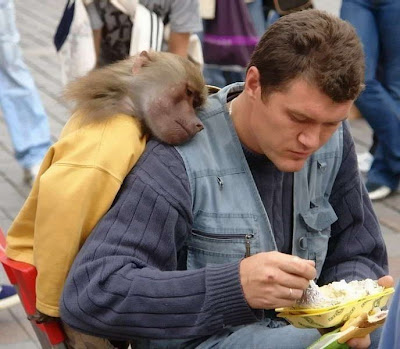 A charter-boat captain from Lake Charles, La., photographed a rare pink dolphin a couple of weeks ago in Calcasieu Lake, an estuary just north of the Gulf of Mexico in southwestern Louisiana.According to Calcasieu Charter Service's Web site, Capt. Erik Rue was on the lake June 24 with fishing customers when five dolphins came into view — four normal-looking gray ones, and a bright pink one that appeared to be an adolescent. "It appears to be an uncanny freak of nature, an albino dolphin, with reddish eyes and glossy pink skin," the Web site reads. "It is small in comparison to the others it is traveling with and appears to be a youngster traveling with mama. "There is a species of pink dolphin that lives in the Amazon River in South America, but this one appears to be a more common bottlenose dolphin.
There are more photos here.
Posted by The Man at 7:10 AM No comments: