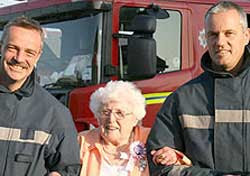 Fire crew gatecrash 83rd birthday party as candles set off alarm
An 83-year-old woman's birthday party drew some uninvited firefighting guests after the candles on her cake set off a smoke alarm. Joan Harries was enjoying a gathering of about 40 family and friends in Cardiff when the fire crew burst in. Although she had just 10 candles and blew out five of them, the cake was under the alarm in her retirement flat. She called it particularly embarrassing as her father had been a fire chief, but said the crew had found it funny. The retired nurse said her birthday cake had been brought in after everyone had finished eating. "My daughter had only put 10 candles on it and I blew out five of them and the smoke started to go up and unfortunately it was under the smoke alarm," she explained.
The South Wales Fire and Rescue Service team arrived at her home in the Birchgrove area of the city last Friday. Once the fire alarm goes off, you can't stop it," she said. "We were all sitting in the lounge when the firemen arrived and they asked 'Where is the fire?' "They saw me sitting down with the cake and they started to laugh. Everybody was in hysterics.
"I felt like such a fool and the more I apologized, the more they were laughing." She added: "The firemen were great. They just checked everything was all right and they thought it was very funny."
Posted by The Man at 8:59 AM No comments:

Why Halloween will not be the same this year. 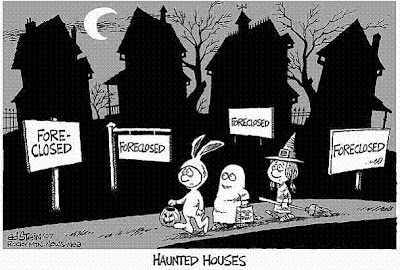 A primary school has stopped giving its pupils spelling tests because children find them distressing.
Whitminster Endowed Church of England Primary School, near Stroud, in Gloucestershire, has dropped the traditional spelling lists for homework.
The new policy was revealed in a newsletter to parents which said many of the school's 105 pupils found the activity "unnecessarily distressing".
Headteacher Debbie Marklove wrote in the newsletter: "You will notice that the children will not be given spelling lists to learn over the week and then be tested in class.
"We have taken the decision to stop spellings as homework as it is felt that although children may learn them perfectly at home they are often unable to use them in their daily written work.
Also many children feels this activity unnecessarily distressing.
Posted by The Man at 8:48 AM No comments:

Waterskiing Elephant
At the Pittsburgh Bicentennial regatta in 1959.

.
Waterskiing Horse
Posted by The Man at 8:44 AM No comments:

A dog exercise while sleeping