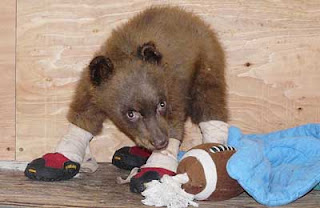 A baby bear whose paws were scorched in a forest fire has been saved thanks to some unusual footwear. Li’l Smokey, a baby black bear cub, was rescued by fire fighters while fleeing a Shasta-Trinity National Forest wildfire, in northern California, in July. Suffering second and third degree burns on his paws after stepping on to the scorching ground, Li’l Smokey was taken to the nearby Lake Tahoe Wildlife Care Center for rehabilitation.
Weighing just 8.5lbs, the six-month-old cub, who was named by the fire fighter who rescued him, was given little chance of survival. However thanks to the care and attention of the workers at the center – and some unusual bandages and bear booties – Li’l Smokey is on the road to recovery.Now walking on bare paws, Smokey has been moved to a bigger cage with one screened side that means he will be subjected to the natural weather outside.
SlideShow.
Posted by The Man at 10:36 AM No comments:

Young Kids To The Rescue

Quick thinking pupils guided an air ambulance to a stricken climber in the Peak District by forming a 'human arrow'.
The helicopter was struggling to find the man until youngsters from the Grosvenor School in Edwalton pointed the way.
They lined up in an arrow shape pointing to the spot where the man had fallen.
The year-six youngsters, aged ten and 11, were on the second day of a school trip to the Roaches
The climber fell about three metres and injured an ankle when his rope pulled him into the rock face.
A paramedic arrived but was unable to move the man and called Staffordshire air ambulance.
Teacher Chris Adcock said: "We could hear the air ambulance on its way but then it could not locate the site of the accident around the other side of the rocks.
"We said we needed to direct them to where he was, so I instructed the pupils to form an arrow pointing in the man's direction and almost immediately the ambulance landed.
"I was most impressed by the children's immediate responses, for ten-year-olds there was not any fussing at all. We talk to them about what to do in an emergency and they put this into practice.
Ian Clayton, operations manager of the air ambulance said: "When the crew arrived there was quite an expanse of rocks so the helicopter was going backwards and forwards trying to identify the patient. What they then saw was a human arrow which was extremely helpful and helped them to identify the patient. One problem we have in a helicopter is that people will just stand and wave at you. Being able to point with the children was invaluable."
Posted by The Man at 10:28 AM No comments:

The best gift in the world is still... the box.

Greg's Star Wars Trade Federation MTT "Troop Carrier" arrived.
We took it out of the box and he is playing with it. 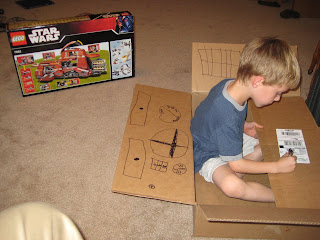 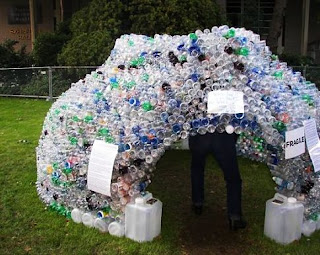 "This year, Americans will drink more than 30 billion single-serving bottles of water. To raise awareness of the alarming problem of plastic waste, Jasmine Zimmerman created the Bottle House - an open-roofed greenhouse made from hundreds of recycled plastic bottles.
It’s an excellent example of recycle a harmful and overlooked material into one that will grow vegetation, and Jasmine plans to exhibit the greenhouse in empty lots, rooftops, parks, and vacant buildings to help spread the word."
Posted by The Man at 10:19 AM No comments: