This is typical. It beats me how human civilization ever advanced when they can't even sort out a reasonably-sized catflap for me. As if trying to squeeze through that hopelessly minuscule hole isn't humiliating enough, they have to leave carrier bags full of bottles for recycling by the entrance, which makes the whole pallaver noisy and tiresome. I wouldn't mind but the Master and Mistress frequently stand there and laugh as I struggle to get into the house. I can't see the joke myself, but I've learned that humans are strange, mysterious creatures.
.
.
Posted by The Man at 5:30 PM No comments:

A Somerset man suspected a worm virus when his computer crashed - but was shocked to learn the problem was a real wom.
Mark Taylor called out an IT repairmen who found a five inch earthworm inside his laptop, reports the Daily Telegraph.
It had crawled into his computer through an air vent and wrapped itself around the internal fan, leading to a total breakdown.
Mr Taylor, 45, suspects the culprits were his two cats who are in the habit of pouncing on earthworms outside and bringing them into the house.
Mr Taylor, from Yeovil, said: "The worm was obviously looking for a hiding place and must have crawled in through the air vent to get away from the cats.
"I couldn't help thinking that people get computer worms all the time, but not real life ones."
Computer technician Sam Robinson, 28, who discovered the worm said: "I took the back off and had a look inside. Then I spotted what at first I thought was some sort of hair band or elastic band wrapped around the fan.
"I soon discovered that it was a worm which had been burned to a frazzle. It had obviously wrapped around the fan when somebody had turned on the computer and caused the breakdown due to the fan jamming.
"Needless to say I hadn't come across a problem like this before but was happy to sort it out for Mark."
.
Posted by The Man at 5:26 PM No comments:

Labels: Computers, In the News 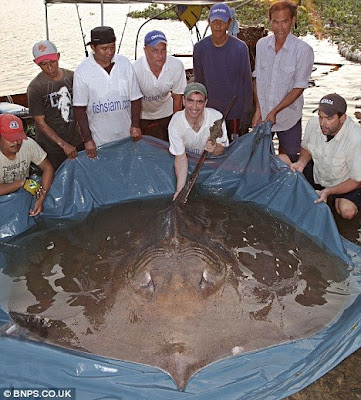 A giant stingray billed as the largest freshwater fish ever caught by rod and reel snagged the line of a freshwater biologist in Thailand, according to news reports Tuesday.
Ian Welch was visiting from Britain to assist a catch-and-release tagging program to track the endangered stingrays. The fish nearly pulled him into the sea he said
"It dragged me across the boat and would have pulled me in had my colleague not grabbed my trousers," said Welch
The female stingray weighed 772 pounds and measured seven feet long, the Guardian reported. The tail measured 10 feet long.
"As soon as we saw it there was just silence because everyone was just in awe of this thing," Welch told the Telegraph. "That line from the film Jaws came to mind about needing a bigger boat because we had to get it to the shore to tag it."
It took 13 people to lift the creature so it could be tagged. It was described as being the size of a garden shed.
The stingray's poisonous barbed tail was wrapped in cloth as the animal was tagged. Welch gave her a kiss before she swam back out to the wild.
.
Posted by The Man at 5:19 PM No comments: