LUCKY by name, lucky by nature - that's the case for Taronga Zoo's newest nursery edition, Monifa the pygmy hippo.
Born three weeks ago and unable to stand or feed herself, the piglet-sized hippo would have died within days, but for the intervention of dedicated zoo staff.
Hippo keepers Renae Zammit and Tracy Roberts have been living round-the clock with the 3.8kg infant.
The pair spent a fortnight sleeping with and hand-feeding Monifa - who's name means "I am lucky" in Nigerian.
The infant has now moved into her own pen and is ready to follow the footsteps of her father Timmy, the last pygmy hippo born at Taronga 23 years ago.
Born during the early hours of October 15, Monifa initially had to be patiently coerced into even trying to feed from a syringe. Ms Zammit and Ms Roberts spent alternate days working around the clock to keep her alive.
She has now doubled in weight and is drinking from a bowl, content to suckle the thumb of her keepers.
A delighted Ms Zammit said Monifa was already showing signs of playfulness.
"She's such an inquisitive little thing and loves bath time, she even turns somersaults in the water," she said.
The species grows to about 1m in height - almost half the size of other hippos.
There's a photo gallery here.
.
Zoo Shows Off Pygmy Hippo
Australia's Taronga Zoo in Sydney recently showed off its latest addition, a baby pygmy hippo. Monifa, who is only three weeks old, is currently the size of a puppy.
There are less than 3,000 pygmy hippos remaining in the world.
.
.
So Cute
Posted by The Man at 10:20 AM No comments:

Cash Hidden in House Walls Becomes a Nightmare
A contractor who found $182,000 in Depression-era currency hidden in a bathroom wall has ended up with only a few thousand dollars, but he feels some vindication.
The windfall discovery amounted to little more than grief for contractor Bob Kitts, who couldn't agree on how to split the money with homeowner Amanda Reece.
It didn't help Reece much, either. She testified in a deposition that she was considering bankruptcy and that a bank recently foreclosed on one of her properties.
And 21 descendants of Patrick Dunne — the wealthy businessman who stashed the money that was minted in a time of bank collapses and joblessness — will each get a mere fraction of the find.
Picture and More
.
Coin Toss Decides Minnesota Mayor's Race
GOODRIDGE, Minn. — A coin toss has determined the winner of the mayor's race in the tiny northwestern Minnesota town of Goodridge.
Incumbent Bob Homme and former Mayor Dave Brown each got 22 votes. Instead of finding the ballots and recounting the 44 votes, they agreed to decide the winner with a coin toss.
It already was a strange race in Goodridge - population 98 - with no one filing to run for mayor. Brown and Homme were both write-ins.
To break the tie, each tossed his own coin. If it was even, meaning two heads or two tails, Homme would win the two-year term. If it was odd, meaning a head and a tail, Brown would win. It was a head and a tail. Brown won.
.
Honeymoon Couple Worst Nightmare
A newlywed couple ended up stuck half-way up a mountain when their sat-nav went wrong on their honeymoon.
Oliver Kohl, 24, and bride Angela, 23, were heading to a luxury hotel in the remote village of Willingen, Germany, after their wedding in Hamm, near Dortmund.
But they got lost as their sat-nav guided them along a bumpy, unpaved forest road toward a tall mountain.
Oliver said: "At one point there was a gate I had to open, and then eventually the road became a muddy swamp and we got stuck fast."
The pair tried for hours to get their car out before having to call cops who sent out a rescue team to get them off the side of the 2,755ft mountain.
The pair were eventually taken to their honeymoon hotel.
A police spokesman said: "It's a wedding night they will never forget."
.
Kenyan moms name babies after Obama
Mothers in Kenya have marked Barack Obama's US election win by naming their babies after him.
More than half of the babies born in a Kisumu Hospital the day after the election were named either Barack or Michelle Obama.
Kisumu is close to the village where Mr Obama's father was born and raised and Mr Obama is a local hero.
The region erupted in celebration after he won the race for the White House, reports the BBC.
Of the 15 babies born in the New Nyanza Provincial Hospital in Kisumu, five boys were named Barack Obama and three girls were called Michelle.
One mom, Pamela Adhiambo, gave birth to twins, a boy and a girl, and named them Barack and Michelle Obama.
"I made up my mind to name them long before the elections, and even if Obama had not won, I would still have done the same," she said.
.
Car impounded after dog drives away from car wash
A dog waiting in a car while at a car wash slipped the vehicle into gear and drove in a loop before the car came to a stop. Pryor police officer Brent Crittenden said the dog's owner was washing the vehicle when the 70-pound pit bull jumped on the dash and somehow shifted the car into reverse.
The car backed out of the car wash bay, continued onto a highway and then looped around before coming to a stop at an automated car wash lane.
Crittenden said the vehicle was impounded because its owner was unable to provide proof of insurance.
Because the dog was registered with the city, Crittenden said the owner was allowed to walk the pooch home.
.
Posted by The Man at 8:29 AM No comments: 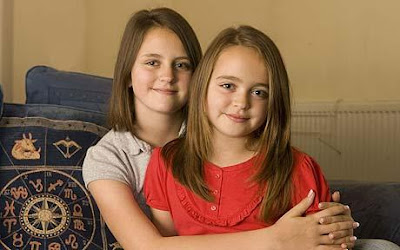 Evie and Chloe Church have a rare illness which can cause them to die if they hear a loud noise or experience sudden shock.
Every morning the sisters, aged nine and 11, have to be woken from their sleep with the greatest of care.
The girls have the rare medical condition Long QT Syndrome, which causes an abnormality of the heart's electrical system.
As a result of their illness, any sudden rush of adrenaline or a sharp rise in blood pressure could prove fatal.
Even any type of exercise - especially swimming - could be fatal.
Samantha Church, the girls' mother, said: "Sometimes it just feels like I'm living with a time bomb, terrified it today will be the day it goes off.
"It breaks my heart not knowing if they are going to be here tomorrow or in five years time."
Long QT Syndrome affects one in 7,000, and is usually genetic.
Mrs Church, 41, said: "My mother-in-law had the condition and had to have a defibrillator fitted.
"We had the girls checked from an early age but initial tests proved inconclusive."
It was doctors at Swansea's Singleton Hospital who picked up the little-known condition during an ECG scan of the youngest daughter, Evie, in July this year.
Mrs Church said: "Chloe and Evie have to be woken up really carefully in the morning and have to skip PE lessons at school.
"They exercise using the Nintendo Wii, but have to be strictly supervised.
"They're both on beta blockers for life. It's been incredibly tough for them, but they've coped remarkably well."
Luckily for the girls, they are fairly safe from harm as long as they can prepare for loud noises.
It meant they could go with their friends to a fireworks party this week and enjoy the bangs like any other child.
"I want Chloe and Evie to try and have as normal a life as possible – I can't wrap them up in cotton wool," added Mrs Church.
Posted by The Man at 8:24 AM No comments:

I.C.E. on Your Cell Phone

Apparently this is a standard procedure all paramedics follow at the scene of an accident when they come across your cell phone.

ICE - 'In Case of Emergency'
We all carry our mobile phones with names & numbers stored in its memory but nobody, other than ourselves, knows which of these numbers belong to our closest family or friends.

If we were to be involved in an accident or were taken ill, the people attending us would have our mobile phone but wouldn't know who to call. Yes, there are hundreds of numbers stored but which one is the contact person "in case of an emergency"? Hence this 'ICE' (In Case of Emergency) Campaign
The concept of 'ICE' is catching on quickly. It is a method of contact during emergency situations. As cell(mobile) phones are carried by the majority of the population, all you need to do is store the number of a contact person or persons who should be contacted during emergency under the name 'ICE' (In Case Of Emergency).
The idea was thought up by a paramedic who found that when he went to the scenes of accidents, there were always mobile phones with patients, but they didn't know which number to call. He therefore thought that it would be a good idea if there was a nationally recognized name for this purpose. In an emergency situation, Emergency Service personnel and hospital Staff would be able to quickly contact the right person by simply dialing the number you have stored as 'ICE.'
For more than one contact name simply enter ICE1, ICE2 and ICE3 etc. A great idea that will make a difference!
Let's spread the concept of ICE by storing an ICE number in our Mobile phones today!
Please forward this. It won't take too many 'forwards' before everybody will know about this . It really could save your life, or put a loved one's mind at rest . ICE will speak for you when you are not able to.
Posted by The Man at 1:32 AM No comments: