Dubai driver racks up $97,000 in traffic penalties
A Dubai student who racked up traffic offence penalties of $97,000 (£61,888) has been caught by police.
The man, who eluded officers for two years and continued to collect speeding tickets, also had his 4X4 vehicle seized, the Gulf News reported.
He was forced to pay fines of $69,754 immediately, and must find a further $27,247 to get his car back.
Local media said the man, who committed 400 separate offences, has had his driver's license revoked.
.
Man sets record for most hugs in 24 hours
A 51-year-old Ohio man has embraced the Valentine’s Day spirit faster than anyone before, giving 7,777 hugs in 24 hours for a new world record.
.
Baby leopard wanders into Indian village
A leopard cub has become the talk of the town in northern India after appearing out of nowhere in the early morning and wandering onto a family's doorstep. Nobody knows if the mother of the one-month-old cub abandoned her baby or whether she was killed or lost.
After receiving information that villagers had spotted a cub, Deputy Ranger of India's Forest Department Ram Gopal Chauhan arrived at the village of Bijnor.
"When we reached the site, we saw it was a leopard cub, one-month-old", he said. "To ensure his safety we took the cub to our station, where we fed it some milk. Then we took it for a medical check-up."
Ranger Chauhan and his team hope the cub will be reclaimed by its mother, if she is still alive.
.
Posted by The Man at 4:36 PM No comments:

Is this the place I go to get this thing off my head? 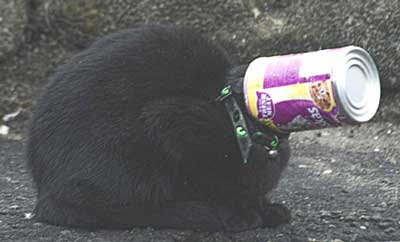 A cat walked into the Scottish SPCA's Wildlife Rescue Center by her self
with her head wedged in an empty pet food tin.
After the can was carefully removed she was checked over.
.
Posted by The Man at 3:41 PM No comments: