25 Most Colorful Lakes on Earth 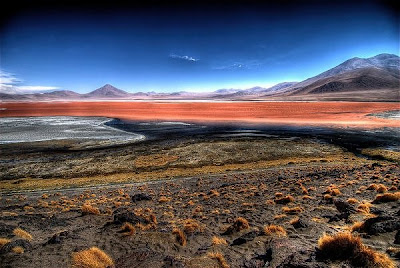 Purple and Red Lakes
Wonderful shot of a large salt lake, Uyuni, Bolivia. The red color is caused by astronomical numbers of microscopic, unicellular organisms living in the water and salt crust.
.
Turquoise and Blue Lakes
Green and Yellow Lakes
Click Here
Posted by The Man at 12:34 PM No comments:

Surveillance video shows the bear standing on hind legs to open door.
At one point the bear can be seen coming around behind the counter to sniff at the ingredients.
Rebecca Branton, an employee, is seen making a run for the bathroom, as the bear wanders around the Subway restaurant in Kitimat, British Columbia, Canada.
His every move was caught on the shop's nine video cameras.
It was tranquilized by conservation officers and relocated.
.

Bellboy, Can You Carry My Trunk? 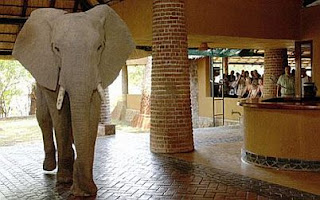 It's not everyday that you see a wild elephant standing next to you at the reception of a hotel.
But in the Mfuwe Lodge in the South Luangwa National Park in Zambia, the sight of one or even ten elephants strolling around the lobby is a regular occurrence.
Unwittingly built on the elephant's traditional path in 1998, the Mfuwe Lodge stands directly en-route to this elephant herd's favorite food - wild mangoes.

A clip from Philip Morrison's 1987 PBS program "The Ring of Truth: Atoms" featuring chef Kin Jing Mark making noodles to demonstrate the principle of halving.
.
Posted by The Man at 9:12 AM No comments: