The bike that you pedal backwards to go forwards 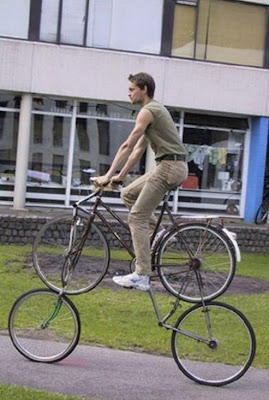 .
• He collects Spider-Man and Conan the Barbarian comics
• He was known as "O'Bomber" at high school for his skill at basketball
• His name means "one who is blessed" in Swahili
• His favourite meal is wife Michelle's shrimp linguini
• He won a Grammy in 2006 for the audio version of his memoir, Dreams From My Father
• He is left-handed – the sixth post-war president to be left-handed
• He has read every Harry Potter book
• He owns a set of red boxing gloves autographed by Muhammad Ali
• He worked in a Baskin-Robbins ice cream shop as a teenager and now can't stand ice cream
• His favorite snacks are chocolate-peanut protein bars
• He ate snake meat and roasted grasshopper while living in Indonesia
• He can speak Spanish
• While on the campaign trail he refused to watch CNN and had sports channels on instead
• His favorite drink is black forest berry iced tea
• He promised Michelle he would quit smoking before running for president – he didn't
• He kept a pet ape called Tata while in Indonesia
• He can bench press an impressive 200lbs
• He was known as Barry until university when he asked to be addressed by his full name
• His favorite book is Moby-Dick by Herman Melville
• He visited Wokingham, Berks, in 1996 for the stag party of his half-sister's fiancé, but left when a stripper arrived
• His desk in his Senate office once belonged to Robert Kennedy
• He and Michelle made $4.2 million (£2.7 million) last year, with much coming from sales of his books
• His favorite films are Casablanca and One Flew Over the Cuckoo's Nest
• He carries a tiny Madonna and child statue and a bracelet belonging to a soldier in Iraq for good luck
• He applied to appear in a black pin-up calendar while at Harvard but was rejected by the all-female committee.
• His favorite music includes Miles Davis, Bob Dylan, Bach and The Fugees
• He took Michelle to see the Spike Lee film Do The Right Thing on their first date
• He enjoys playing Scrabble and poker
• He doesn't drink coffee and rarely drinks alcohol
• He would have liked to have been an architect if he were not a politician
• As a teenager he took drugs including marijuana and cocaine
• His daughters' ambitions are to go to Yale before becoming an actress (Malia, 10) and to sing and dance (Sasha, 7)
• He hates the youth trend for trousers which sag beneath the backside
• He repaid his student loan only four years ago after signing his book deal
• His house in Chicago has four fire places
• Daughter Malia's godmother is Jesse Jackson's daughter Santita
• He says his worst habit is constantly checking his BlackBerry
• He uses an Apple Mac laptop
• He drives a Ford Escape Hybrid, having ditched his gas-guzzling Chrysler 300
• He wears $1,500 (£952) Hart Schaffner Marx suits
• He owns four identical pairs of black size 11 shoes
• He has his hair cut once a week by his Chicago barber, Zariff, who charges $21 (£13)
• His favorite fictional television programs are Mash and The Wire
• He was given the code name "Renegade" by his Secret Service handlers
• He was nicknamed "Bear" by his late grandmother
• He plans to install a basketball court in the White House grounds
• His favorite artist is Pablo Picasso
• His speciality as a cook is chilli
• He has said many of his friends in Indonesia were "street urchins"
• He keeps on his desk a carving of a wooden hand holding an egg, a Kenyan symbol of the fragility of life
• His late father was a senior economist for the Kenyan government
Posted by The Man at 12:33 PM No comments:

"Build It and They Will Use It" 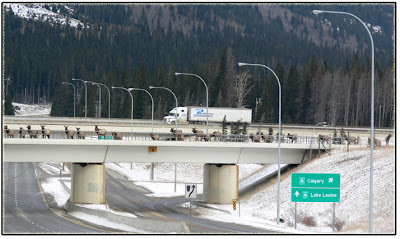 This is the actual turnoff from Banff to the #1 highway to Calgary.
They had to build the animals (especially the elk) their own bridge crossing because that was where the natural crossing was and after the highway was built there were.
It didn't take the animals long to learn that this was their "road."
Posted by The Man at 11:28 AM No comments:

Cyclist goes around the world on penny farthing 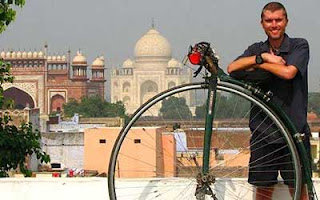 A cyclist has completed a 22,000-mile cycling trip around the world on a penny farthing. Joff Summerfield pedaled his handmade replica of a Victorian bicycle into Greenwich Market, south-east London, where his journey began two-and-a-half years ago.Mr Summerfield, 40, visited 23 countries in four continents after setting off from 0 degrees latitude at the Greenwich Observatory. He averaged 11mph and covered up to 40 miles a day as he cycled across Europe into Turkey before riding through Australia and New Zealand.
In Australia, he raced in the Penny Farthing World Championships and came second in one of the 'novice' categories. From China - where he cycled without the correct permits - managed to sneak across the border into Tibet he despite his bike's giant front wheel that is 1.2 meters in diameter.
He then took in India and Nepal, where he crossed the Himalayas at 17,000ft (5,200m) and made it to Everest base camp.Mr Summerfield, who was forced to abort two previous attempts through injury, next rode through south-east Asia, the USA and Canada before heading for home. En route, he took in landmarks including India's Taj Mahal, the Great Wall of China, Cambodia's Angkor Wat temple complex and the Grand Canyon in the USA.
He believes he is the first man to complete the circumnavigation on a penny farthing since Thomas Stevens, who was British, in 1887.
Posted by The Man at 11:16 AM No comments:

Charity worker finds $7,500 among donated shoes
This stacks up among the better finds at a Goodwill store: $7,500 in cash stuffed in a shoebox. A recent Bulgarian immigrant found the money during her first day on the job last week at a Goodwill near St. Louis in Glen Carbon, Ill.
Teodora Petrova didn't hesitate after finding the cash with a pair of donated shoes - she turned the money over to a manager who told executives for the nonprofit charity.
The president and chief executive of the area's Goodwill organization says it's eager to find the owner of the money. The charity figures it may have been left with the shoes accidentally.
If the owner isn't found, Goodwill says the money will go toward the charity's job-placement efforts.
.
Parrot credited with choking tot rescue
DENVER, Nov. 11 (UPI) -- A Denver area babysitter said her pet parrot may have saved the life of a 2-year-old girl by raising a ruckus when the toddler started choking.
The babysitter, who gave her name as Meagan, said she was using the bathroom in her home while babysitting for the 2-year-old, Hannah, when she heard her parrot, Willie, screaming wildly,
"Willie started screaming like I'd never heard him scream before and he started flapping his wings," Meagan said. "Then he started saying 'mama baby' over and over and over again until I came out and looked at Hannah and Hannah's face was turning blue because she was choking on her pop tart."
Meagan said she performed the Heimlich maneuver and stopped the young child's choking.
"If (Willie) wouldn't have warned me, I probably wouldn't have come out of the bathroom in time because she was already turning blue, her lips were blue and everything," Meagan said.
.
Weight violation prompts elevator rescue
Seven people had to be rescued from a stalled elevator in New Bedford, Mass., City Hall after the vehicle's weight restriction was surpassed, an official says.
John Perry -- the New Bedford Department of Public Facilities superintendent of facilities, maintenance and construction -- said the elevator had an approximate weight capacity of 1,700 pounds, and the weight of 10 people was just too much for the elevator car to handle last week.
Perry said riders packed into the elevator despite the weight limit warning and stalled the transport for two hours Thursday.
"Some people just don't want to listen to the elevator operator," Perry said.
Three of the trapped riders chose to leave the stalled elevator using a ladder but the remaining seven had to wait in the elevator car until rescuers could free them.
Officials would be more stringent regarding the use of the elevator, which was manufactured in 1912 and is the nation's oldest continually operating elevator.
"We will be kicking people off from now on," the superintendent said.
.
Feinstein Urges Web Sites Not to Sell Scalped Inauguration Tickets
Sen. Dianne Feinstein, who is overseeing Barack Obama's swearing-in ceremony, is asking Web sites like eBay not to sell scalped inauguration tickets -- which could be sold for up to $40,000 online.
WASHINGTON -- The senator overseeing Barack Obama's swearing-in ceremony said Monday she's writing to Internet sites like eBay asking them not to sell scalped inauguration tickets.
Sen. Dianne Feinstein, D-Calif., also said she's crafting a bill that would make a federal crime of selling tickets to the historic event Jan. 20.
Feinstein, who chairs the Joint Congressional Committee on Inaugural Ceremonies, said she foresees overwhelming demand for the 240,000 available tickets and has heard reports they may be sold for as much as $40,000 online.
The tickets are supposed to be free to the public and distributed through congressional offices.Lawmakers' offices won't get the tickets until shortly before the inauguration, to try to prevent scalping. In-person pickup will be required.
Posted by The Man at 11:09 AM No comments: