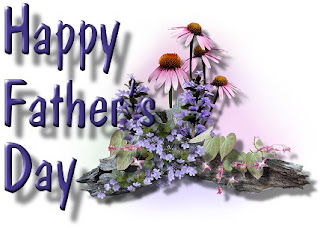 For the father that you are, and the father that you've been,
If I had a choice to make, I'd choose you, Dad, again.
For the trials I put you through, and for the times I let you down, I'm proud you've finally seen, how I turned my life around.
You never ran away,when the times were tough to take...instead you gave me courage, to face my own mistakes.
Thank you for your strength, and the faith to see me through...the love you gave to me, is the love I'm sending you!
Have a wonderful Father's Day!
Posted by The Man at 2:05 PM No comments:

Have you hug someone today? 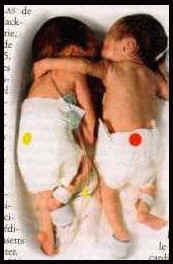 This is a picture from an article called "The Rescuing Hug.

"The article details the first week of life of a set of twins.

Apparently, each were in their own respective incubators,and one was not expected to live.

A hospital nurse fought against hospital rulesand placed the babies in one incubator.

When they were together, the healthier of the two babiesthrew an arm over her sister in an endearing embrace.

Let us not forget to embrace those whom we love

and never underestimate the power of a hug.

He countered that the wife always brews the coffee, just like she always does the cooking. She claimed the Bible said otherwise. He asked her to prove it.

Returning with a Bible, she opened it to a page in the New Testament and pointed to it: and indeed, it did say "Hebrews".
Posted by The Man at 8:20 AM No comments: 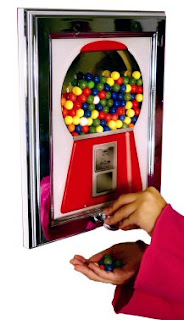 Put yourself in the frame for some great gum with our new gumball picture frame.

The picture frame bubblegum dispenser features an image of an antique gumball machine on the front of a silver colored frame. The background is a mirror effect which adds a third dimension to the "picture". Trapped between the layers is a space to fill with your favorite bubble gum balls!

Once mounted on a wall, it's easy and fun to use and dispenses gum balls with one turn of the knob!

Hang this frame in your home or office, and you'll be particularly popular letting friends or colleagues have a go.

HONOLULU - For many Americans, spam is a
four-letter word for unwanted e-mail. In Hawaii, Spam is a beloved comfort food, with cans of the gelatinous pork bricks found in virtually every cupboard.

Hoping to cash in on Hawaii's love affair with the pinkish meat product, Burger King Corp. last month began offering Spam for breakfast — going head-to-head with rival McDonald's Corp., which has been featuring Spam in the islands for years.

Burger King is offering the Spam Platter — two slices of Spam nestled between white rice and scrambled eggs. The fast-food giant also offers the Croissanwich or Biscuit Sandwich with Spam.

"It's so popular with the locals, we wanted to cater to them," she said.

Putting Spam on the menu, alongside more traditional items such as the Whopper, has been in the works for about a year, and Burger King's corporate headquarters finally signed off on the idea.

"It's something that was a little unique and a little different for them, so it was a bit of a hard sell to bring to Hawaii," Yamauchi said. "But they finally realized it is a unique flavor and something the locals really like."
Posted by The Man at 7:58 AM No comments:

CAMBRIDGE, Mass. -- How many power cords does it take for Massachusetts Institute of Technology researchers to make a light bulb glow? Answer none.

They've come up with a way to make a 60-watt bulb glow by sending energy wirelessly from a device across the room.

The breakthrough was published in the online version of the journal Science. The scientists have dubbed their finding WiTricity.

It's not a new concept, but scientists had dismissed wireless juice as inefficient because energy generated by charging devices radiates in all directions.

But leave it to an MIT physics professor to make it work.

The key is to get the recharging device and the gadget that needs power on the same frequency, similar to how a radio picks up only one station at a time.

A new pastor was visiting the homes of his parishioners.
At one house it seemed obvious that someone was at home, but no answer came to his repeated knocks at the door.
Therefore, he took out a business card and wrote "Revelation 3:20" on the back of it and stuck it in the door.

When the offering was processed the following Sunday, he found that his card had been returned.
Added to it was this cryptic message, "Genesis 3:10."

Reaching for his Bible to check out the citation, he broke out in laughter.
Revelation 3:20 begins "Behold, I stand at the door and knock."
Genesis 3:10 reads, "I heard your voice in the garden and I was afraid for I was naked."
Posted by The Man at 6:37 AM No comments:

May you be in Heaven before the devil knows you are dead.
Posted by The Man at 6:32 AM No comments:

To my wife: My overdraft at the bank. Maybe she can explain it.

To my son: Equity on my car. Now he will have to go to work to meet the payments.

To my banker: My soul. He has the mortgage on it anyway.

To my neighbor: My clown suit. He will need it if he continues to farm as he has in the past.

To the farm credit corporation: My unpaid bills. They took some real chances on me. I want to do something for them.

To the junk man: All my machinery. He's had his eyes on it for years.

To my undertaker: A special request. I want six implement dealers and six fertilizer dealers for pallbearers. They are used to carrying me.

To the weatherman: Rain, hail and snow for the funeral please. No sense in having good weather now.

To the grave digger: Don't bother. The hole I'm in now should be big enough.

To the monument maker: Set up a jig for the epitaph. "Here lies a farmer who has now properly assumed all of his obligations."
Posted by The Man at 6:27 AM No comments: