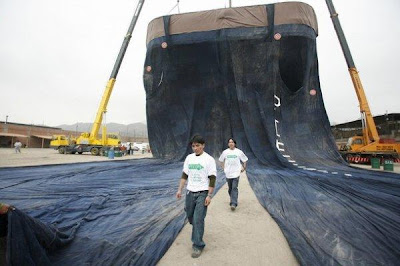 Peruvian seamstresses hoping to snag a Guinness World Record for sewing the largest pair of blue jeans.
Workers laid the pair on the ground and put big balloons inside the legs to show off the size of the jeans, which are 141 feet (43 m) tall and 98 feet (30 m) wide.
They are hoping to break the current record. The current record is held by the city of Medellin in Columbia. That pair was 114 feet tall and 82 feet wide.
They have pockets, red buttons and a brown belt.
After the event, the pants will be cut to make backpacks for area school children.
.
Posted by The Man at 2:09 PM No comments:

One Trillion Dollars Visualized from www.mint.com 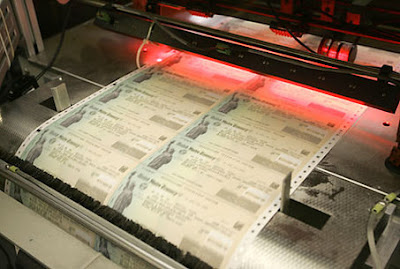 The inspector general's office for the Social Security Administration is looking into the problem as part of its broader audit on stimulus spending. The Social Security Administration acknowledged the $425,000 glitch following a report that nearly two-dozen inmates in Massachusetts had wrongly received the $250 stimulus checks.
A total of 3,900 inmates not receiving benefits were sent a stimulus check and that of those, 2,200 were due the payment because they were out of prison late last year. The other 1,700 were mistakenly sent the checks.
The number was "relatively small" given the fact that 52 million total payments were made, and that most of the mistaken payments have been returned by the correctional institutions. He did not provide specifics for how much of the $425,000 had been returned.
.
Posted by The Man at 7:51 AM No comments: