Care worker gets more then £84 million overdraft credit by bank

Kaylie Cooper, 20, of Highnam, near Gloucester, had asked for the modest increase on her £200 overdraft to help with the Christmas spending.
But when the Alliance and Leicester replied it offered her 1.6 million times more than she had asked for.
Miss Cooper, who works at the National Star college for severely disabled teenagers and young adults at Birdlip, nr Gloucester, said "I rang them up three days ago to ask if they could extend my overdraft by £50.
"I needed the overdraft because of the time of year - it's just before Christmas and I have to pay my car tax and MOT.
"They then sent me a letter saying 'We are pleased to confirm that we have arranged an overdraft limit of £84,480,090.00 on your account.
"I thought it was funny with the credit crunch.
"They have obviously made a mistake - if they were right I could be one of the richest people in the country.
"I was in shock when I opened it.
"It was like having all my Christmases at once."
Miss Cooper added: "The bank was offering to lend me an awful lot of money - £84million. And the letter said they would only charge a fee of £5 a month for being overdrawn.
"I couldn't stop laughing when I got it in the post - I think I may be telling people about it for quite some time."
A spokesman for Alliance and Leicester said: "We apologise for any inconvenience or upset caused to Kaylie and can confirm this is an unfortunate one-off incident.
"The letter was sent off incorrectly."
.
Posted by The Man at 9:38 AM No comments: 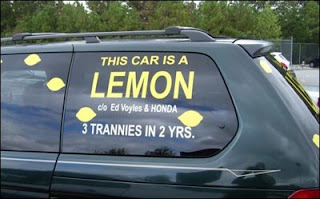