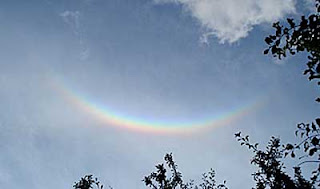 Exceptional atmospheric conditions created a rare and stunning display in the skies above Cambridge.
At 4.45pm on Sunday, a circumzenithal arc - which looks like a bright, upside-down rainbow was visible above the city.
Cambridge-based astronomer Jacqueline Mitton captured the stunning sight, caused by sunlight being refracted through ice crystals high in the atmosphere, with her camera. The phenomenon is rarely seen outside the polar regions.
She said: "The conditions have to be just right: you need the right sort of ice crystals and the sky has to be clear. It's quite surprising for this to occur somewhere like Cambridge, usually it is in places that are colder."
The intensity of the colors in the rainbow was heightened by the sun being at the optimum spot in the sky - 22 degrees. A Met Office spokeswoman said: "They are fairly rare. It is convex to the sun and is formed by refraction in suitably-oriented ice crystals and may show vivid rainbow coloring, as in this case."
Astronomer Jacqueline Mitton took this shot of the 'upside-down rainbow', a rare atmospheric phenomenon, which appeared above Cambridge over the weekend.
Posted by The Man at 9:42 AM No comments:

A duck that’s chicken of water 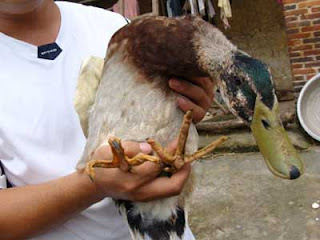 A Chinese farmer is baffled after he bought a duck that has feet like a chicken and is scared of water.
Curious villagers in Huangjin village, Xicheng town, are flocking to the home of Fu Haiwen to see the duck.
Fu said he bought the duck and was surprised to see it did not have webbed feet.
"It never went with the other ducks to swim in the river," he explained.
Posted by The Man at 9:37 AM No comments: