Hot Pink House Has To Go 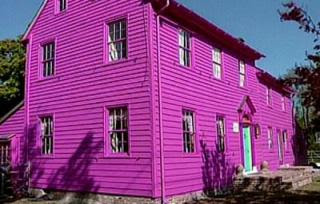 The owners of the Nathaniel Holmes, Jr. House located in Dennisville's historic district have painted the building and neighboring gift shop "forward fuschia."
The house was built 208 years ago, and up until this week was white, much like the other historical buildings that surround it.
Some residents are upset over the color choice, but there may be nothing they can do.
According to the town council, the community doesn't have any rules about house color.
Video and More
Posted by The Man at 1:54 PM No comments: 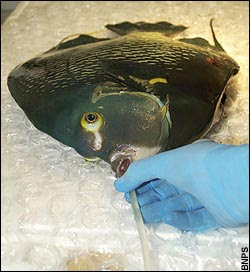 Carla the fish has had a life-saving operation after developing a hernia.
The 10-inch-long angelfish was laid out on an operating table while a vet and two assistants carried out the unusual surgery.
After being anaesthatised the exotic fish had a tube placed in her mouth and water pumped through her body and out her gills to enable her to breathe.
Vet Sue Thornton repaired the stomach condition using a scalpel, a needle and forceps during the £500 operation.
After being stitched up and brought round the plucky fish was kept under close observation before she went on to make a full recovery.
Carla has been a resident at the London Aquarium for 10 years and staff decided to try and save her rather than put her to sleep when she developed the hernia.
Posted by The Man at 10:14 AM No comments:

A raccoon does a head stand - Funny

As U.S. gasoline prices go down, driving habits goes back up
Doug Guidry gave up drag racing and boating last summer when gasoline prices shot up. Billy Castaneda put off trips to Houston to see his grandchildren. Randal Shul stopped playing paintball with his buddies to save gasoline.
Now, with U.S. gasoline prices dropping, all three men are hitting the road again. "Gas going down means freedom, even when everyone is worried about the economy," Castaneda said as he filled his 1995 Oldsmobile 88 to drive 125 miles to Houston the other day.
.
Study: Daylight Saving Time Saves Lives
Heart Attacks Dip Monday After Clocks Turned Back
Turning your clock back may be good for your heart.
Swedish researchers looked at 20 years of records and discovered that the number of heart attacks dipped on the Monday after clocks were set back an hour from daylight saving time to standard time, possibly because people got an extra hour of sleep.
But moving clocks forward appeared to have the opposite effect. There were more heart attacks during the week after the start of daylight saving time, particularly on the first three days of the week.
"Sleep — through a variety of mechanisms — affects our cardiovascular health," said Dr. Lori Mosca, director of preventive cardiology at New York-Presbyterian Hospital, who was not involved in the research. The findings show that "sleep not only impacts how we feel, but it may also affect whether we develop heart disease or not."
.
Texas Samaritan buys woman her house at auction
A woman distraught over losing her house showed up to watch it auctioned off, but that wasn't the end of the story. Tracy Orr will return home after a stranger bought the house back for her Saturday.
"It means so much to all of us," Orr said. "It's not just a house."
Marilyn Mock said she decided on the spot to buy the house after striking up a conversation with a sobbing Orr at the auction Saturday. Mock was there to help her 27-year-old son bid on a house.
Mock successfully bid $30,000 for Orr's house in Pottsboro. Orr will make payments to her once the deal is finalized.
"She needed help. That was it," Mock said. "I just happened to be there, and anybody else would have done the same thing."
Orr bought the house for $80,000 in 2004 but lost her job a month after taking out the loan. She fell behind on her payments and lost the house this year _ an increasingly common story across the nation.
The two are waiting on final approval from mortgage giant Fannie Mae before visiting the home. Mock's son also bought a house at the auction.
.
Young Girl Turns in $1000 Found in Richard Simmons Videotape
The best bargain at the Salvation Army thrift store in Kailua-Kona was a Richard Simmons videotape.
But Mikela Mercier, 11, decided to pass up the chance to buy the tape for a few coins after she found a surprise inside: $1,000 in $100 bills.
Mikela says that when she discovered the money while browsing through the used tapes, she immediately looked for her mom who was inside the dressing room and told her they needed to turn it in.
Store manager Jimmy Thennes put out a news release on the discovery, praising Mikela for her honesty.
Her mother, Jodi Mercier, says she is very proud of her daughter who she says knew it belonged to the Salvation Army so the agency can help more people in need.
.
False leg found underneath ride
The 28-year-old Corkscrew, which cost £1.25m, was Europe's first double-looped rollercoaster.
The leg was just one of many bizarre items found near The Corkscrew, which is to be dismantled after carrying 43.5 million people since it opened in 1980.
Staff clearing the site also found a diamond wedding ring, 53 non-matching shoes and 604 watches.
Other lost property items included 800 pieces of jewelry, 237 mobile phones, thousands of caps and a prosthetic ear.
The ride, which reaches speeds of up to 44mph (70km/h), opened on 4 April 1980.
'Missing leg'
Riders are turned upside down twice within three seconds - which probably explains the large amount of lost items found below.
The Staffordshire amusement park said it was used to dealing with more than 5,000 items of lost property, such as car keys, money and mobile phones.
.
Posted by The Man at 7:51 AM No comments: