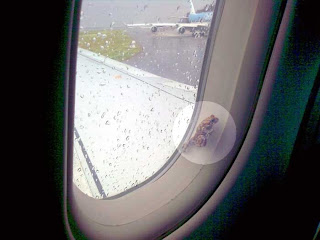 Dog knew what to do

Dog calls 911 to help owner having seizure
An assistance dog calls 911 and saves his owner's life last week in Scottsdale.
A dispatcher with the Scottsdale Police Department took a call from an assistance dog who barked on the other end of the line.
The dog was trained to call 911 whenever his owner lays down and is unresponsive. All the buttons on the phone are preprogrammed to dial 911.
This isn't the first time the dog has called 911.
Video
Posted by The Man at 3:49 PM No comments: 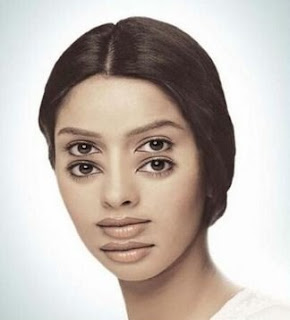 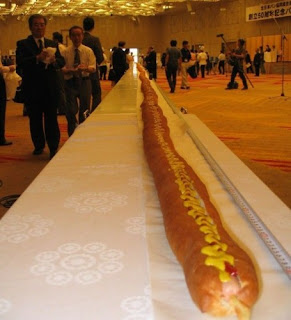 Pothole From Hell or Pothole To Hell 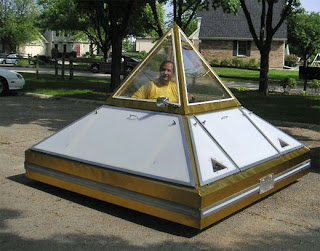 While this pyramid-shaped car might look pretty goofy, it’s actually an energy-efficient electric vehicle which laughs in the face of today’s gas guzzlers. And with gasoline costing upwards of $4 bucks a gallon these days, anything that runs on alternative energy seems like a welcome change.
Created by Sugar Grove, Illinois inventor Greg Zanis, the Dream Car 123 tools down the street at up to 40 mph. A single 3.5 hour charge provides about 240 miles of driving for only about $5 in electricity cost. Take that gasoline!
More Pictures and Videos 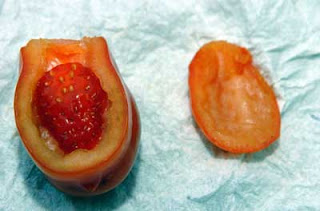 We all heard of cherry tomatoes — but this tomato has left gardeners baffled.
Esther Walker found the freaky fruit when she cut into a tomato from her vegetable patch for a snack.
Esther, 48, of Cheltenham, Gloucs, said: "It definitely looks like a strawberry in a tomato and it tastes like a tomato but a bit sweeter."
She added: "We’re keeping it in the fridge in case an expert wants to look at it."
Posted by The Man at 11:43 AM No comments: 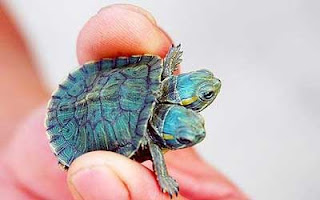 A tortoise born with two heads has amazed aquarium staff, after taking advantage of his disability to consume twice as much food as his siblings.
Workers at the Water World aquatic farm at Wuwei town in Anhui, eastern China, were shocked to discover the unusual creature after they ordered a shipment of baby tortoises from a local farm.
Initially they were worried that the tiny 0.6oz (17g) mutant reptile would not survive, but it soon began to overtake its brothers and sisters in size.
Water World spokesman Jimmy Hu said: "We got it two weeks ago and it's growing fast, probably because it can eat twice as fast as the others.
"It was mixed among many other tortoises and we only discovered it this week.
"It's very rare to see a tortoise with two heads, we plan to keep it and raise it carefully for future research."
Two-headed tortoises are extremely rare, but not unheard of.
In 2004 John Jones, from Dorchester, Dorset, was amazed to find his Mediterranean spur-thighed tortoise hatched a two-headed infant.
Although its two heads worked independently, like the Chinese tortoise, it is believed their necks were joined.
Also, in 2003 welder Noel Daniels reported that a two-headed angulate tortoise had hatched from eggs laid at his home in Wellington, South Africa.
And Jill Martin, of the Tortoise Trust, also hatched one in south Wales in 2001.
Posted by The Man at 11:38 AM No comments:

Lucky the hamster has lucky escape 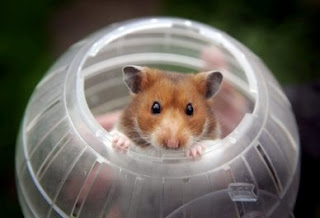 When Lucky the hamster decided to pack up and run she did it properly – along a main road to Carlisle in heavy traffic.
Paw-padding along in her own plastic ball, motorist Nick Smith watched in awe as the rodent made her way into the city center.
He said: "I was driving along London Road with my son Ben in the car when something caught my eye in the gutter.
"I saw a plastic ball trundling along and it overtook me so I stopped the car and jumped out. My son didn’t believe me when I said there was a hamster inside. I was amazed."
Mr Smith parked his car on Sunday on the stretch of road between B&Q and Halfords and asked if anyone had lost a hamster.
Mr Smith, an electrical engineer, said: "I knocked on a few doors but no-one knew anything about it so goodness knows where she came from.
"I decided that the only thing to do was to take her home with us to Wreay.
"She’s brown and white and all she’s done since we got her home is sleep during the day but she’s up at night. We had to buy her a new cage, bedding and food – which cost about £50.
"My daughter Rebecca was really pleased as she’d been mulling over the idea of getting a hamster for some time.
"We used to have one which we kept in one of the kid’s bedrooms and it used to get on its wheel at 3am and wake everyone up."
Lucky joins their other pets, including a Dalmatian, two cats and lots of fish.
"How she survived is a miracle. She must be the luckiest hamster in the world – hence her new name Lucky," said Mr Smith.
Posted by The Man at 11:33 AM No comments: