Someone with too much time and money on their hands 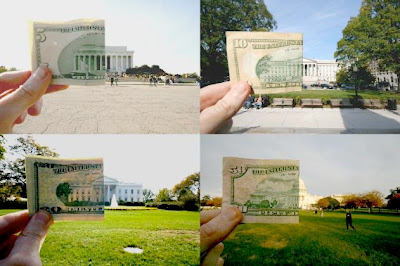 Whisper it in my ear 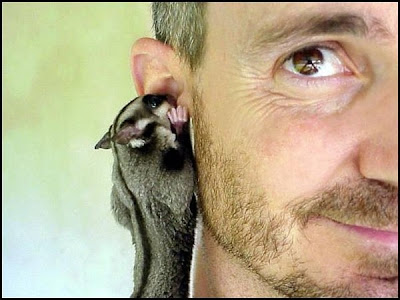 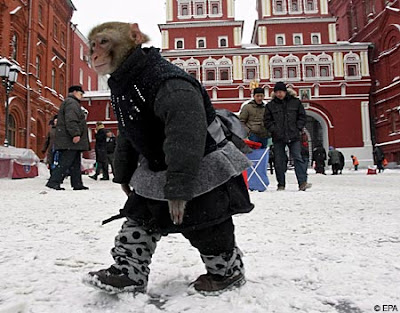 A warmly dressed monkey walks with other pedestrians in the center of Moscow.
The heavy snowfall covers Russian capital during the last two days and street photographers, who attract people using exotic animals, dressed them warmly to make their business all-season.
Posted by The Man at 7:05 AM No comments:

Dog is barking mad over vet's ban on curry 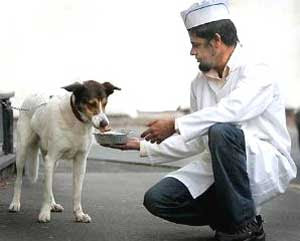 A curry-mad canine has been banned from the hot stuff after wolfing down too much of his favourite food.
Chorlton mongrel Dante has such a taste for tandoori that he refuses to eat normal dog food and regularly turns up outside his local take aways and restaurants begging for curry.
Now vets have told his owner Pauline Rawsterne to put him on a strict no-curry diet because it has given him a bowel disorder.
Thankfully for 11-year-old Dante, he has been saved from pet purgatory after a local takeaway stepped in and offered to create a healthy version of his favourite dish that suits his new diet.
Pauline said: “I’ve started giving him different dog food that’s a bit tastier but nothing can compare with curries as far as Dante’s concerned. He gets quite annoyed and starts to sulk if I give him normal dog food.”
Luckily for Dante, Mohammed Asdar Ali, who owns the Village Tandoori on Beech Road, Chorlton, took pity on him and created a healthy dog-friendly chicken balti dish which will not inflame Dante’s bowel problems. Ali said: “No curry-lover should be deprived of their favourite food so we came up with something that Dante can enjoy without giving himself any more health problems.”
Posted by The Man at 7:00 AM No comments:

Labels: Animal's, Food-Drink, In the News

Ancient language under threat being lost for ever 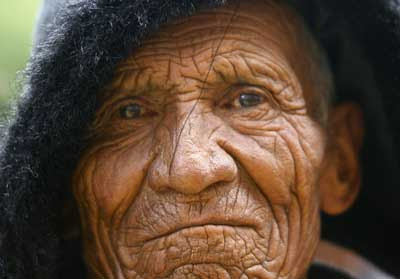 Two elderly men thought to be the last speakers of a Latin American language are refusing to speak to each other.
They are in their seventies now and should be doing their bit to pass their language on to other people in their community.
But a Mexican institute says it is concerned that their rare language may never be heard again.
The two old men who aren't talking live in the Mexican state of Tabasco and their mother tongue is an indigenous language called Zoque from Tabasco.
Fernando Nava is a linguist and knows the pair. "They don't speak to each other by personal reasons, nothing to do with the language itself," he said.
"They have a personal story. One of them is a prosperous man, the other one is a poor man."
Posted by The Man at 6:56 AM No comments: 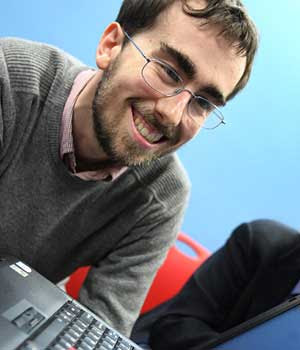 French "mathlete" Alexis Lemaire showed off his rare mental agility on Thursday, claiming a new world record after working out in his head the 13th root of a random 200-digit number in just 72.4 seconds.
Lemaire, a 27-year-old doctoral student in artificial intelligence from Reims, near Paris, was presented with the randomly-picked number by a computer, which displayed the figure over 17 lines on the screen.
Lemaire, who says he doesn't consider himself a nerd or a geek, then took just over a minute to identify two quadrillion, 397 trillion, 207 billion, 667 million, 966 thousand, 701 as the 13th root.
In other words, the number multiplied by itself 13 times produces the 200 digit number originally generated by the computer.
"The first digit is very easy, the last digit is very easy, but the inside numbers are extremely difficult," the mental gymnast said.
Lemaire, who sports a beard and glasses under thickly-matted eyebrows and a furrowed brow, previously performed the feat in 77 seconds and has been working at the 13th root problem for years, repeatedly eroding his best time.
Posted by The Man at 6:47 AM No comments: