Auctioneers at Christie's were pleasantly surprised this week when they sold an old New England phone book for six figures.
The slender booklet that was the first phone directory in New Haven, Conn., went for $170,500 after some spirited bidding by six buyers Tuesday.
Auctioneer Tom Lecky told the Hartford Courant Wednesday the sale price was "beyond recognition" since Christie's had expected the 1878 volume to fetch about $30,000.
Lecky told the newspaper the New Haven book was pretty impressive for its time. It contains listings for about 400 subscribers, which is much thicker than comparable phone books printed in Chicago and San Francisco.
The level of interest in the new technology may have been higher in Connecticut since Alexander Graham Bell had invented the telephone in New Haven just two years earlier.
Posted by The Man at 9:39 AM No comments: 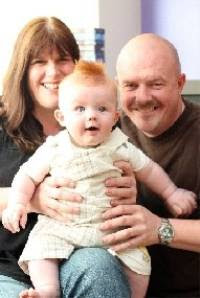 SUPER tot Charlie Railton stunned doctors and midwives when he weighed in at a hefty 13lbs 4oz at birth.
The bruising baby – who also measured in at 60cms long – is thought to be the second largest ever born at Pontefract General Infirmary when he came into the world on January 29.
Now aged just four months he wears clothes to fit a one-year-old – and his astronomic size shows no sign of stabilizing. His proud mom Steph Munton, of Wenthill Close, High Ackworth, said: "Charlie's birth was quite traumatic – he was born naturally after a ten-hour labor." Our midwife said he was the biggest she'd delivered in 22 years and the second largest ever born at PGI. "Now he is four months old and he weighs 24 pounds – that's about the size of a one-year-old." Charlie is the latest large addition to the family, with his sisters Bethan,12, Amber, 15, and brother Sam, nine, all weighing more than ten pounds at birth.
Steph added: "I thought the others had been large but Charlie completely overshot that. "He is just as large, proportionally, as when he was born. He's not fat but his feet are big, his arms are, everything is." "He eats three meals a day and loves loads of fruit and vegetables."