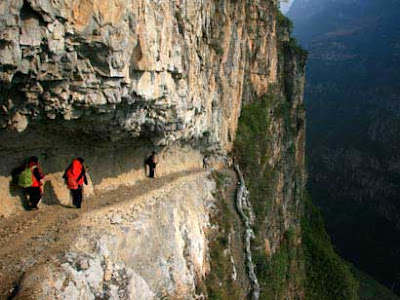 Children in a remote part of China face a hazardous walk to school - because it is halfway up a sheer cliff.
The school in Gulu village, Sichuan province, lies halfway up a mountain and climbing up from the base takes five hours.
The elementary school has only one teacher who has been there for 26 years.
Villagers say going to school is very dangerous for the children, since the path is only 1ft 4ins wide at the narrowest point and has a sheer drop on one side.
Walking along the narrow, zigzagging path also makes the children feel dizzy, they say.
The school has five concrete buildings and a playground with a basketball hoop made of two wooden poles and a broken blackboard.
However, the children are allowed to only pat the balls, as if they throw them and they go over the edge of the cliff, it would take half a day to retrieve them.
Shen Qijun, 45, the teacher, has threatened to quit several times, but each time the villagers plead with him to stay as there would be nobody else to teach their children.
Shen teaches Chinese and Math to the students, but says only two students in 26 years have gone on to university because of the isolation.
A volunteer who has been teaching there for three months said: "The students work very hard, but they have never seen computers, cars or even flushing toilets."
Posted by The Man at 1:23 PM No comments:

A Raccoon plays a watery harp 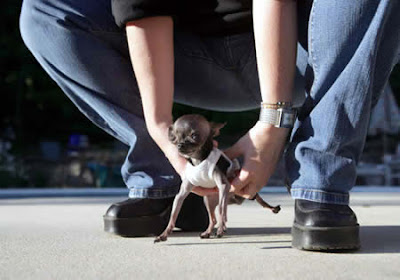 At 1.4 pounds and 4.9 inches tall, Ducky, a yappy short-coat Chihuahua from Charlton (Massachusetts, USA), holds the Guinness World Record for the world's smallest living dog (by height). Ducky succeeds Danka Kordak of Slovakia, a Chihuahua who measured 5.4 inches tall. The smallest dog ever, according to Guinness, was a dwarf Yorkshire terrier who stood 2.8 inches tall.