A New York City cab driver is being praised for returning over $21,000 lost by a visitor from Italy.
Felicia Lettieri, who's 72, left her purse in a Manhattan taxi on Christmas Eve. It contained traveling money for her and six relatives.
Police told them not to get their hopes up about finding it.
The cabbie drove about 50 miles, to a Long Island address he'd found in the purse. No one was home, so he left his phone number, and later returned with the money.
Lettieri's daughter, Maria Rosaria Falonga, told Newsday from Pompei, Italy that the cabbie also left a note.
He told her: "Don't worry, Felicia. ... I'll keep it safe."
The driver, Mukul Asaduzzaman, could not be reached for comment.
He refused a reward.
.
Posted by The Man at 3:15 PM No comments:

Just how did this driver see out of her windshield? 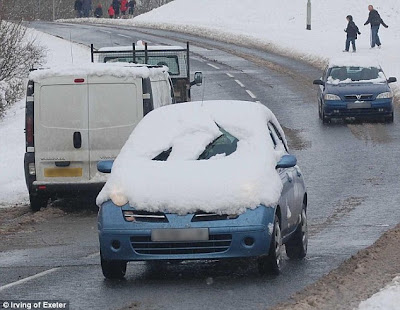 Police pulled over this elderly motorist after she was spotted driving with her windshield covered in thick snow.
The pensioner was on the roads in hazardous and freezing conditions with a layer of snow and ice across the top of her blue Nissan.
She had managed to move her wipers just a few inches to clear a tiny area of glass to peer out from. Police say she had left the house to buy food when she was spotted by a traffic officer who pulled her over - and gave her an ice scraper.
.

A woman stood outside a Florida police station holding a sign explaining her battery of a police officer as part of her punishment.
Alexandra Espinosa-Amaya, 24, stood for four hours Tuesday outside the Orlando Police Department apologizing for her actions as part of her no-contest plea to misdemeanor charges of simple battery and resisting an officer without violence, the Orlando Sentinel reported Wednesday.
The sentence also includes two years of probation, 50 hours of community service, anger management classes and a written apology letter to Sgt. Andrew Brennan.
Espinosa-Amaya was arrested for shoving Brennan in the face with her palm when he attempted to help a club bouncer who was removing her and her sister, Natalia Espinosa-Amaya, 22, from an establishment
Posted by The Man at 3:08 PM No comments:

Girls at an Illinois high school have been banned from carrying purses because officials say they have become so large, they are a safety hazard.
The ban, approved by the East Peoria Community High School board in December, replaces an earlier compromise, the Peoria Journal reports. Staffers say a rule limiting purse size to no bigger than a single sheet of paper simply did not work.
"Girls' purses have become so huge it was difficult for teachers to walk up and down aisles of the classroom," Robin Goff, dean of students, said Friday. "Teachers and students were tripping in the aisles. It had become a fire hazard, too."
Beginning Monday, the only legal bag will be the Raider string bag, a canvas sack that can be carried as a shoulder bag or backpack. The bag is being sold for $3.
Backpacks have been banned at the school since the terrorist attacks of Sept. 11, 2001.
Many students are not happy with the new edict.
"I don't think it's fair," said Kayla Shaw, a junior carrying a large purse as she left school Friday. "We're girls. We need to put stuff in our purses."
.
Posted by The Man at 3:04 PM No comments: