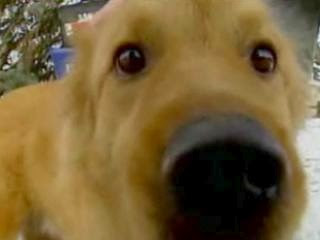 A New Whiteland, Indiana man confined to a wheelchair says he owes his life to the same dog he once rescued.
Don Fisher rescued Auggie, a golden retriever mix, from a local shelter nearly a year-and-a-half ago.
Auggie and his litter had been abandoned.
"Threw him in a dumpster. Him and his brothers and sisters," explained Fisher.
Last week Auggie returned the favor when Fisher says the dog saved his life.
Fisher is confined to a wheelchair after his legs were amputated for diabetes.
The 75-year-old went outside in his wheelchair early Friday morning to get the paper.
Auggie, as he usually does, followed.
When Fisher tried to turn around, he realized his wheelchair was stuck in the snow.
Fisher was stuck outside in freezing cold temperatures with no protection other than a sweatshirt and sweat pants.
"I was stuck. I was hopelessly stuck," Fisher said. "Anybody wonders where the end's going to come and I thought that would be it. I was in total despair."
Fisher said he knew he had only one shot at help: Auggie.
"He looked at the chair and he looked at me and I said, 'Go get Mark'," Fisher recalled. "I saw that was my only chance and I said, 'Go' and he went. He's never done anything like that in his life."
Fisher's son Mark was asleep inside, but Auggie woke him up.
"He barked at me a couple times, which is something Auggie doesn't do," Mark Fisher said. "For him to bark at me was an indication that something was wrong."
Then Auggie ran to the door and came back to Mark, still barking.
"He was very agitated, very antsy, that I needed to get up," said Mark.
Auggie never stopped until Mark finally followed him outside and found his dad stuck in the snow.
"Without a doubt he saved my life. There's no question at all and I think he'd do it again," said Fisher.
It didn't take long for Auggie's rescue story to get around the neighborhood.
Someone even sent him this tag that says "Hero."
"You're eating this up, aren't you big boy?" Fisher asked Auggie.
As for eating, these days, Auggie gets whatever he wants.
"As soon as we can find one, he's getting a big ham with a bone in it. That's for sure," said Fisher.
He says it's the least he can do for a dog that's more than earned the title "Man's Best Friend."
VIDEO
.
Posted by The Man at 11:42 AM No comments:

A generous tip to a hotel chamber maid proved a costly mistake for a Lebanese man after it led to him being caught with $66m of fake currency.
The man gave the woman a US $500 bill - a denomination last printed in 1945 and only in very limited circulation.
Police in Malaysia were called after the housekeeper found the note was a fake when she tried to change it to local currency at a bureau de change.
When officers arrested the man they found fake currency with a face value of $66m in bundles of $1m, $100,000 and $500 notes in his Kuala Lumpar hotel room.
The man now faces up to 10 years jail if convicted of possessing counterfeit currency.
The largest denomination of US currency ever printed by the US Treasury Department was a special edition one for $100,000 in 1934.
The largest US note currently in wide circulation is a $100 bill.
.
Posted by The Man at 11:36 AM No comments:

Police in Taranto Italy said a 4-year-old boy who considered himself too old for his pacifiers called authorities to surrender the baby toys.
Taranto police said the boy called the emergency line a few days before his birthday and explained that he thought the police should have his old pacifiers, ANSA reported Thursday.
"I'm old enough now so you can have my dummies," the boy told the operator.
Police said two officers visited the boy's birthday party and traded him a souvenir hat in exchange for his four old pacifiers.
.
Posted by The Man at 11:29 AM No comments: