Psst…You want to hear a secret 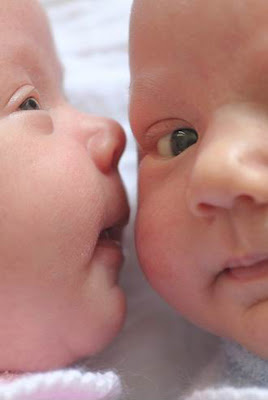 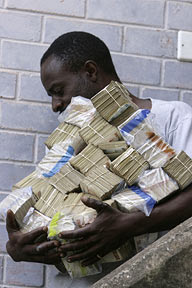 Zimbabwe's dollar, ravaged by hyperinflation, does not even come in the form of a proper bank note.
Instead most bills are 'bearer cheques', marked with an expiry date, but will become worthless long before it is reached.
More recently the reserve bank, which is issuing bills in ever-larger denominations, moved on to 'special agro-cheques', leading to comments about how much 'aggro' people have to deal with.
All three agro-cheques – they come in a brown Z$50 billion denomination, the green Z$25 billion, and the pink Z$5 billion - have a picture of a grain silo on one side. The sad irony is that the national treasury is as empty as the country's grain silos.
.
A Zimbabwean man carries enough cash for some groceries in March of this year
.
On the rare occasions when products are available, the prices are astronomic.
At the TM supermarket in Borrowdale, in Harare's western suburbs, many shelves were bare yesterday. But a kilo of mince cost Z$490 billion, a kilo of sausage Z$170 billion, and a tin of baked beans Z$30 billion.
Despite Zimbabwe's desperate shortage of food, heavy import duties have been slapped onto edible products, and a litre of imported orange juice cost an eye-watering Z$303 billion.
Some prices have trebled from a week ago, when lavatory paper worked out at just under Z$22 million for a single sheet of two-ply. There was none in the supermarket yesterday, but by now there is probably an alternative use for the Z$50 million dollar note.
At one Harare restaurant dinner was Z$875 billion per person, and the house wine a little short of half a trillion dollars a bottle.
Posted by The Man at 7:07 AM No comments:

A tarsier munching on a bug 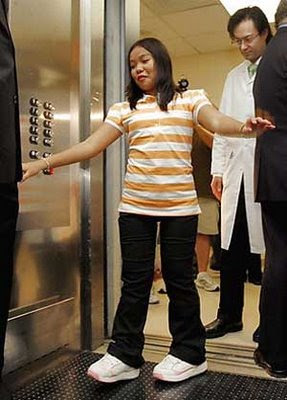 A Filipino teenager who went to New York so doctors could perform surgery to untwist her severely clubbed feet took her first unaided steps Wednesday in pink-and-white sneakers - the first shoes she's ever worn. "I'm very happy," Jingle Luis said with a smile. "It was exciting." The 15-year-old girl arrived at Montefiore Medical Center in the Bronx in May with her mother for surgery and follow-up treatment.
She had never been able to walk on her own because she was born with feet so clubbed they twisted backward and upside down, forcing her to hobble on the tops of her feet with the help of crutches. On Wednesday, doctors took off her post-surgical casts and replaced them with special support braces. Then came the moment she had waited a lifetime for: She slipped her feet into her first pair of shoes and took several long strides.
Posted by The Man at 7:01 AM No comments:

Man shocked at finding chicken head inside frozen food bag
Peter Stanton bought a bag of Asda frozen ribs and chicken wings for his daughter’s birthday barbecue and found a chicken’s head inside. Salesman Peter, 39, was about to grill the defrosted wings at the bash for nine-year-old Georgia when he glimpsed a beak.
He took the head back to his local Asda in Rawtenstall. Store chiefs gave him £50 of beer and wine to compensate and promised to investigate.
PICTURES
.
Runway tractor carrying potatoes mashes car
A farmer in Germany has learned a harsh lesson about the dangers of smoking. While he ducked into a convenience store to buy cigarettes, his parked tractor and its load of 25 tons of potatoes went rolling down a hill - and into a parked car, no one was hurt.
Police say the emergency brake came loose while the farmer was in the store, and the tractor and its two trailers barreled 30 yards downhill before hitting the parked car and crushing it against a wall.
Police in the western German village of Viersen said that the car was a "total loss." The tractor and trailers, however, emerged unscathed.
Posted by The Man at 6:54 AM No comments: