Thank you for this wonderful meal... 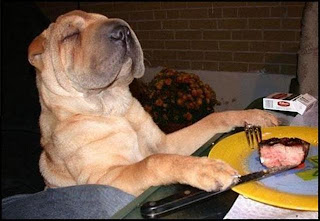 Q: Where can women over the age of 50 find young, sexy men, who are interested in them?
A: Try a bookstore under fiction

Q: What can a man do while his wife is going through menopause?
A: Keep busy. If you're handy with tools, you can finish the basement. When you are done you will have a place to live.

Q: How can you increase the heart rate of your 50+ year old husband?
A: Tell him you're pregnant.

Q: How can you avoid spotting a wrinkle every time you walk by a mirror?
A: The next time you're in front of a mirror, take off your glasses.

Q: Why should 50+ year old people use valet parking?
A: Valets don't forget where they park your car.

Q: Is it common for 50+ year olds to have problems with short term memory storage?
A: Storing memory is not a problem, retrieving it is a problem.

Q: As people age, do they sleep more soundly?
A: Yes, but usually in the afternoon.

Q: Where do 50+ year olds look for fashionable glasses?
A: Their foreheads.

Q: What is the most common remark made by 50+ year olds when they enter antique stores?
A: "I remember these".
Posted by The Man at 3:39 PM No comments:

Childhood Lessons
The best place to be when you're sad is with your dog.
Puppies still have bad breath even after eating a Tic-Tac.
When your mom is mad at your dad, don't let her brush your hair.
No matter how hard you try, you can't baptize cats.
If your sister hits you, don't hit her back. They always catch the second person.
Reading what people write on desks can get you through the test.
Never hold a dustbuster and a cat at the same time.
You can't hide broccoli in a glass of milk.
School lunches stick to the wall.
Don't sneeze when someone is cutting your hair.
A pencil without an eraser may as well just be a pen.
Don't wear polka-dot underwear under white shorts.
Sometimes your best move is blocked by your own checkers.
Never say "Last one is a rotten egg" unless you're absolutely sure someone is slower than you.
It's impossible to unlearn a bad word.
If you want a kitten or puppy, start out by asking for a horse.
Your room gets smaller as you get bigger.
You can't start over just because you're losing the game.
A snow day is more fun than a vacation day.
If you want someone to listen to you, whisper it.
All libraries smell the same.
Sometimes you have to take the test before you've finished studying.
You can't trust dogs to watch your food.
If you throw a ball at someone, they'll probably throw it back.
Don't nod on the phone.
It's easier to see the mistakes on someone else's paper.

Kids in Church
A little girl became restless as the preacher's sermon dragged on and on.
Finally, she leaned over to her mother and whispered, "Mommy, if we give him the money now, will he let us go?"

A boy was watching his father, a pastor, write a sermon. "How do you know what to say?" he asked.
"Why, God tells me." "Oh, then why do you keep crossing things out?"

A father took his 5-year-old son to several baseball games where "The Star-Spangled Banner" was sung before the start of each game.
Then, the father and son attended a church on a Sunday shortly before Independence Day.
The congregation sang "The Star-Spangled Banner", and after everyone sat down, the little boy suddenly yelled out, "PLAY BALL!!!"

A 6-year-old was overheard reciting the Lord's Prayer at a church service:
"And forgive us our trash passes, as we forgive those who passed trash against us."

After a church service on Sunday morning, a young boy suddenly announced to his mother,
"Mom, I've decided to become a minister when I grow up."
"That's okay with us, but what made you decide that?"
"Well," said the little boy,
"I have to go to church on Sunday anyway, and I figure it will be more fun to stand up and yell, than to sit and listen."

A Sunday School teacher challenged her children to take some time on Sunday afternoon to write a letter to God.
They were to bring their letter back the following Sunday.
One little boy wrote, "Dear God. We had a good time at church today. Wish you could have been there."

One summer evening, during a violent thunderstorm, a mother was tucking her small boy into bed.
She was about to turn off the light, when he asked, with a tremor in his voice, "Mommy, will you sleep with me tonight?"
The mother smiled and gave him a reassuring hug. "I can't, dear," she said. "I have to sleep with your Daddy."
A long silence was broken, at last, by his shaky little voice: "The big sissy."

A mother took her three-year-old daughter to church for the first time.
The church lights were lowered, and then the choir came down the aisle, carrying lighted candles.
All was quiet, until the little one started to sing in a loud voice, "Happy birthday to you, happy birthday to you..."

Nine-year-old Joey was asked by his mother what he had learned in Sunday School.
"Well, Mom, our teacher told how God sent Moses behind enemy lines on a rescue mission to lead the Israelites out of Egypt.
When he got to the Red Sea, he had his engineers build a pontoon bridge, and all the people walked across safely.
He used his walkie-talkie to radio headquarters and call in an air strike.
They sent in bombers to blow up the bridge and all the Israelites were saved.
"Now, Joey, is that REALLY what your teacher taught you?" his mother asked.
"Well, no, Mom, but if I told it the way the teacher did, you'd never believe it!"

A child came back from Sunday School, and told his mother that he had learned a new song about a cross-eyed bear named Gladly.
It took his mother a while before she realized that the hymn was really "Gladly the Cross I'd Bear".

Finding one of her students making faces at others on the playground, Ms. Smith stopped to gently reprove the child.
Smiling sweetly, the Sunday School teacher said, "Bobby, when I was a child, I was told that if I made ugly faces, it would freeze and I would stay like that." Bobby looked up into her face and replied, "Well, Ms. Smith, you can't say you weren't warned!"

A little boy was attending his first wedding.
After the service, his cousin asked him, "How many women can a man marry?" "Sixteen," the boy responded.
His cousin was amazed that he knew the answer so quickly. "How do you know that?"
"Easy," the little boy said. "All you have to do is add it up, like the Bishop said:
4 better, 4 worse, 4 richer, 4 poorer."

A Czech armed robber who targeted McDonald's restaurants was grabbed by the ear and marched to the police station by his mom.
Katka Zahradnikova, 44, from Prague, recognized her 20-year-old son Michal on CCTV footage screened on the local version of Crime watch.
A police spokesman said: "He admitted he was responsible for robbing a number of the fast-food stores and put up no resistance when she marched him down here by the ear and made him give us a full statement. "We couldn't have done it better ourselves."

A family took their frail, elderly mother to a nursing home and left her, hoping she would be well cared for. The next morning, the nurses bathed her, fed her a tasty breakfast, and set her in a chair at a window overlooking a lovely flower garden.

She seemed okay, but after a while she slowly started to tilt sideways in her chair. Two attentive nurses immediately rushed up to catch her and straighten her up.

Again she seemed okay, but after a while she slowly started to tilt over to her other side. The nurses rushed back and once more brought her back upright. This went on all morning. Later, the family arrived to see how the old woman was adjusting to her new home.

"So Ma, how is it here? Are they treating you all right?"