If everyone goes to cell phones, what will happen to the phone books?

People could chose to list their cell phone number in the traditional phone books, but according to snopes.com, there have also been efforts to create a separate directory of cell phone numbers. "Several national wireless providers banded together and hired Qsent Inc., now TransUnion, to produce a Wirelesss 411 service. Their goal was to pool their listings to create a comprehensive directory of cell phone customer names and phone numbers that would be made available to directory assistance providers." However, as of the last update of the Snopes article in February, the opt-in site had not come to fruition. An Internet search does reveal a site called 411txt that is free for those who provide their cellular numbers, and several cell phone directories that are accessible for a fee. Many privacy advocates, lawmakers and industry officials have spoken out against cell phone directories on the grounds that cell phone numbers should remain private. Only time will tell what will happen to the good old-fashioned phone book.
Posted by The Man at 1:44 PM No comments:

A four-year-old girl was left behind at Israel's Ben Gurion international airport on Sunday as her mother, father and four siblings rushed to catch a flight to Paris, police said.
"I saw a little girl in tears. She was looking for her parents," a policewoman told reporters.
"Luckily she was able to give me her name. I grabbed her and ran to the gates but it was too late," the plane had just taken off, she said.
According to police, the girl's parents only realized she was missing when the pilot of the plane informed them just as the aircraft was taking off.
"It is usual that travelers in a rush forget their luggage but not a child. This never happens," a police official said.
The incident was a stark reminder of the US box office hit "Home Alone" in which a little boy was accidentally left alone as his family rushed to the airport and flew to Paris for a Christmas holiday.
But unlike the movie, there was a happy ending for the little girl who was able to join her parents. She was flown to Paris on the next flight out accompanied by a flight attendant.
The forgetful parents will be interrogated by the authorities upon their return home and risk being indicted for negligence, police said.
Posted by The Man at 11:16 AM No comments: 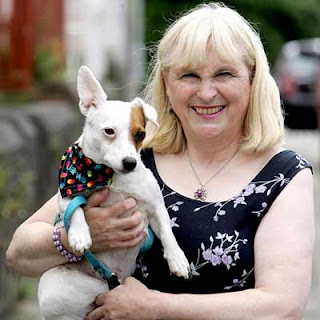 A missing dog found his way home by hitching a ride on a passenger ferry. The Jack Russell called Jarvis coolly walked on to the boat after going missing chasing a rabbit. When it docked in Plymouth he bravely trotted half a mile across busy roads to return to his delighted owners.
Jarvis, six, went missing on an outing to a park on the Cornish side of Plymouth Sound with Vivienne Oxley, 56, and granddaughter Kaytie, two. Vivienne, from Stoke, Plymouth, said: "I was really, really upset when he ran off and honestly didn't expect to see him again."A few hours after his disappearance, Mrs Oxley received a call from the warden to say there had been a sighting, matching Jarvis' description, on the Cremyll ferry. She was about to make her way to the ferry when her husband, Tony, called her to say that Jarvis had miraculously turned up at home in Stoke."I just couldn't believe it. I was so relieved. The staff at Cremyll, who said that he had made several trips on the ferry, laughed and said 'isn't he clever'. When I got home he was just sat in the window as if nothing had happened!"
Posted by The Man at 8:13 AM No comments: