From 1939 to 1942, there was a undersea post office in the Bahamas.
.
Central Park located in New York has 125 drinking fountains.
.
In 1907, on New Year's Eve, the original ball that was lowered in Times Square was made of wood and iron and had 100 light bulbs on it.
.
Americans consume the most peanut butter in the world.
.
850 peanuts are needed to make an 18 oz. jar of peanut butter.
.
Carbonated water, with nothing else in it, can dissolve limestone, talc, and many other low-Moh's hardness minerals. Coincidentally, carbonated water is the main ingredient in soda.
.
Annually 17 tons of gold is used to make wedding rings in the United States.
.
Levan, which is located in Utah, got its name from "navel" which is levan spelt backwards.
It was named this because it is in the center of Utah
.
A dime has 118 ridges around the edge.
.
Posted by The Man at 3:09 PM No comments: 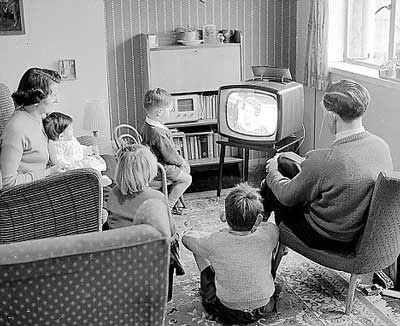 Almost 30,000 people across the UK still tune into their favorite programs on black and white TV sets.
The figures were released by TV Licensing to mark the 40th anniversary of the first color transmissions on BBC1 and ITV.
The 28,000 black and white license holders included 1,950 in Scotland.
The figures showed the black and white sets have not yet been consigned to history despite the rise of flat-screens and the iPlayer.
While the figures show there is still life in the oldest TV equipment, BBC statistics show that emerging technologies are changing the way many of us watch TV.
In September, the BBC iPlayer attracted more than one million unique users a day, who watched a total of 60.8 million TV programs on the internet using computers, smart phones and games consoles, as well as on televisions equipped with the Virgin Media set-top boxes.
“These figures show TV has never been more popular across the spectrum”
Fergus Reid TV Licensing
Yet despite the increasingly divergent ways to watch, leaning back on the sofa in front of your TV set is still the most popular - with sales of flat-screen televisions almost trebling in the past three years.
TV Licensing spokesman Fergus Reid said: "These figures show TV has never been more popular across the spectrum, and with so many ways to watch TV now available, it is important people are aware of their legal responsibilities.
"Whether you watch in black and white on a 40-year-old TV set or in color on a brand new 37in LCD flat screen, you need to be covered by a TV License if watching or recording programs as they are broadcast.
"The same is true if you access programs via the internet as they are being shown on TV - if you're using a laptop, mobile phone, games console or any other device."
The first color TV broadcasts began in 1967 on BBC2 and on 15 November 1969 on BBC1 and ITV. The first color pictures were seen on BBC1 in Scotland in December 1969.
Comedy classic Dad's Army was among the first programs to receive a color makeover.
'Technological breakthrough'
Ian Lavender, who played Private Pike in the series, recalled: "I remember we bought our first color television set to watch the 3rd series of Dad's Army, which had been recorded in color.
"I was also the first actor to be killed by a color TV set on color TV in Z Cars when a robbery went wrong and the TV set was dropped on me from a great height by Nicholas Jones".
Iain Logie Baird, curator of television at the National Media Museum in Bradford and a grandson of John Logie Baird, the inventor of the first television, said he believed the arrival of color TV had an enormous social impact in the UK.
"The arrival of mass color television was a technological breakthrough," he said.
"As more viewers made the switch, it gradually altered the effect of television as a medium, changing both program styles and viewers' perceptions.
"The addition of color enabled viewers to have a greater feeling of actually 'being there' for live events and similarly, an increased sense of involvement in pre-recorded material, which had a major impact on the cultural fabric of the nation."
.
Posted by The Man at 10:16 AM No comments: