“Raging Bull” did major damage to a family home

BERLIN - A German family were stunned when a rampaging bull burst through the back door of their house, charged around the living room, and then left by the front door.
"The animal basically did a tour of the hall, the kitchen and the living room before leaving the building," said Paul Kemen, a spokesman for police in the western city of Aachen on Monday. "It came in the back and went out the front."
None in the family were injured, but the bull caused an estimated 10,000 euros ($15,600) of damage, police said. The bull left after the owner of the house opened the front door for it.
Posted by The Man at 8:01 AM No comments: 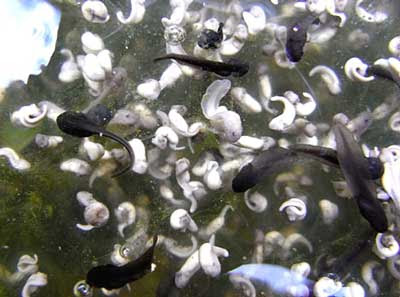 Rare albino tadpoles found in garden pond that have astonished scientists
Experts on amphibians have been caught on the hop by a rare batch of albino tadpoles living in a garden pond.
Tiny pale globules of frog spawn and tadpoles are now under observation at a secret and closely guarded address in Carmarthenshire, west Wales.
Experts from Froglife were called in after at least four separate blobs of albino spawn were found deposited in the pond.
They believe the "highly unusual" discovery could point to a significant frog population carrying the rare recessive gene for albinism.