THE BEST CAT VIDEO YOU MAY EVER SEE 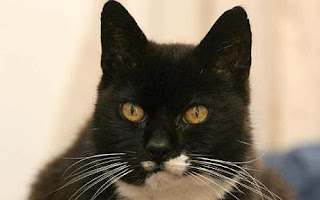 At 27 human years, Mischief is still living up to his name despite "slowing down a little", according to owners Chris and Donna Thorne.
The Guinness World Records has confirmed there is no record holder in the UK at the moment but the previous oldest cat was 29.
Mrs Thorne, 33, of St Austell, Cornwall, said: "It’s amazing - he just keeps going on and on."
Mr Thorne, 51, got the black cat from a friend in nearby Launceston as a kitten in 1981.
He still has photographs of Mischief at just a few months old being cuddled at Christmas the same year.
Almost three decades later, he is still a vital part of the Thorne family, and is adored the couple’s 20-month-old baby Skye.
"She loves him to bits," said Mrs Thorne. "When he eventually goes we’ll have to get another one because she’ll be devastated."