The Cat That Predicts Death 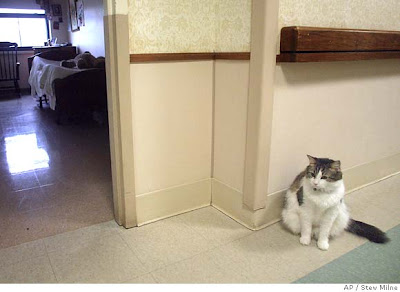 When Oscar the cat curls up next to patients in a nursing home, they die afterwards.

Oscar the cat seems to have an uncanny knack for predicting when nursing home patients are going to die, by curling up next to them during their final hours. His accuracy, observed in 25 cases, has led the staff to call family members once he has chosen someone. It usually means they have less than four hours to live.
Posted by The Man at 2:22 PM No comments:

Is this really a surprise?

Employees waste lots of time surfing the internet.
Using the Internet and chatting with co-workers are the activities that waste the most time each workday, according to the latest study by Salary.com. The 2007 Wasting Time Survey found that the average employee wastes 1.7 hours within an 8.5 hour work day. Surfing the net (34.7% of respondents), along with socializing with co-workers (20.3%) and conducting personal business (17%), were among the top time wasters. Those surveyed also report making personal phone calls and taking long breaks while at work. Nearly 18% of employees reportedly waste time because they “don’t have enough work to do,” while the second most popular response was “my hours are too long” (13.9%). The survey also found that younger workers waste the most time. Employees between the ages of 20 to 29 reported the highest total, wasting an average of 2.1 hours each day, while the average for ages 30 to 39 dropped to 1.9 hours. Ages 40 to 49 report wasting just 1.4 hours daily. While 63% of those surveyed admitted to wasting time at work, the amount of time wasted has actually dropped 19% since Salary.com’s first survey in 2005. » Article here
Posted by The Man at 7:29 AM No comments: 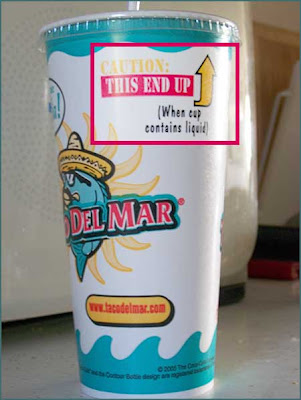 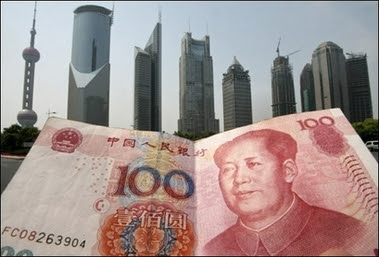 Five Chinese men accused of stealing 51 million yuan (6.7 million dollars) and then buying lottery tickets in an attempt to win the money back have gone on trial.
Bank workers Ren Xiaofeng, 34, and Ma Xiangjing, 37, were charged with embezzling the Agricultural Bank of China in one of the most bizarre bank heists in history. Ren and Ma were vault managers at a branch in Handan city in the Northern Province of Hebei when they started taking money from the safe to play the state lottery in what state media called the country's biggest bank robbery on record. The two thought that by buying millions of yuan in tickets they would eventually win back enough to replace the missing funds and allow them to leave their low-paid jobs for a life of luxury. At first Ren colluded with Zhao Xuenan and Zhang Qiang, charged with misappropriation of public funds, and stole 200,000 yuan from the bank's safe. Ren actually replaced the missing funds after he won the lottery. But Ren became bolder when he began collaborating with Ma, stealing another 50.95 million yuan from the bank during a 30-day period between March and April. They spent a total of 47 million yuan on lottery tickets in Handan, but failing to win, went on the run in mid-April, only to be arrested by police days later.
Posted by The Man at 6:34 AM No comments: