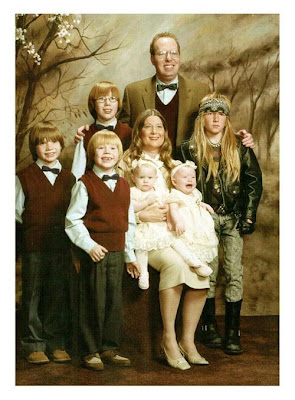 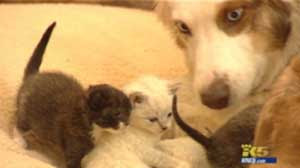 Four kittens from Snohomish, Washington were only three weeks old when their mom got hit by a car last week.
When the family brought the abandoned kittens into the house, their 6-year-old Australian shepherd "Lakota Lou" immediately claimed them as her own.
"We've been doing some hand-feeding with them but then as soon as we're done she takes them," said Lakota's owner, Robert Nesseth.
Every night when the kittens climb into a box to sleep, Lakota Lou stands guard and watches over them.
"Just motherly instinct," said Nesseth. "She had a litter of puppies about four or five years ago and ever since then she's just loved to be a mother."
And this isn't the first time the dog has played foster mom. She's cared for one other newborn kitten in need of a home.
.
Posted by The Man at 12:52 PM No comments:

Mr Mittens, a polydactyl cat has six digits on all four paws. 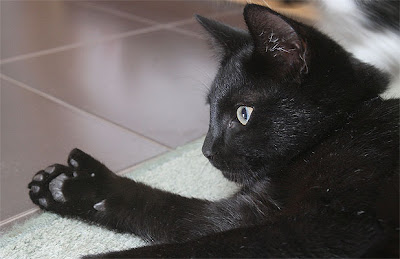 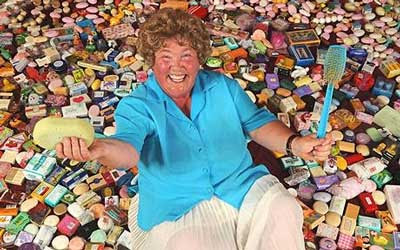 A woman from Birmingham, Carol Vaughn, has collected more than 5,000 bars of soap from all over the world. Mrs Vaughn, 65, from Sutton Coldfield, has been collecting the impressive horde since 1991 and has no plans of throwing in the towel. Her hobby has seen her build up the haul from all over the world and from as far afield as Australia. Her collecting started as a way to pass the time while she was caring for her mother Ivy May, who died in 1991. But since then she hasn't stopped and can't help looking out for a new bar for her collection whenever she can. Miss Vaughn said she loves finding a new soap she hasn't seen before and likes to find ones that might seem unusual.
"I was given one by a friend that is shaped liked cheesecake, you don't know whether to eat it or use it to have a wash," she said. "It's not my favourite, that has to be one which is shaped like Father Christmas's head with a little beard and everything. "It's not from anywhere exotic like some of the others, I just picked it up in a shop in Birmingham - but I love it. She even added another 13 to the stash while she was on holiday in Morocco celebrating her 65th birthday in February. "I wouldn't dream of actually using the soaps, but I do wash regularly, I'm not a dirty old woman," she added. "I suppose you could say I do get myself in a lather when I see a soap I really like, it's great to add it to the collection."
.
Posted by The Man at 12:46 PM No comments: