ST. CHARLES — At 5:30 in the morning, 102-year-old Homer Plackmeyer can't just roll over in bed and sleep in. The residents on the second floor of Building D at Parkside Meadows Retirement Community in St. Charles depend on him. They want their newspaper, and he's their paperboy.Actually, he doesn't have to deliver the papers. He volunteers. When he moved to Parkside nearly three years ago, a woman delivered them, and he didn't think that was right, he said. "Those ladies can't handle those papers," he said. "Most all of them, they're not kids anymore." So he gladly took over. 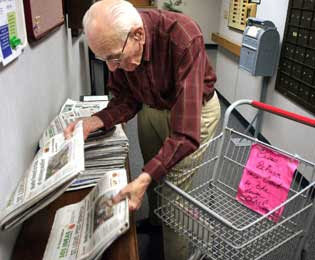 Homer Plackmeyer checks papers for the apartment numbers before putting them in his cart for delivery on the second floor of Parkside Meadows retirement community.
Posted by The Man at 1:44 PM 1 comment:

A purple fluorescent frog is one of 24 new species found in the South American highlands of Suriname, conservationists reported, warning that these creatures are threatened by illegal gold mining.The discovery of so many species outside the insect realm is extraordinary and points up the need to survey distant regions, said Leeanne Alonso of Conservation International, which led the expedition that found the new species.The two-tone frog - whose skin is covered with irregular fluorescent lavender loops on a background of aubergine - was discovered in 2006 as part of a survey of Suriname's Nassau plateau, the conservation group said.Scientists combing Suriname's Nassau plateau and Lely Mountains found four other new frog species aside from the purple one, six species of fish, 12 dung beetles and a new ant species, the organization said in a statement.Including the new species, the scientists observed 467 species at the two sites, ranging from large cats like panthers and pumas, to monkeys, reptiles, bats and insects.While these places are far from human civilization, they are totally unprotected and may be threatened by illegal gold mining.