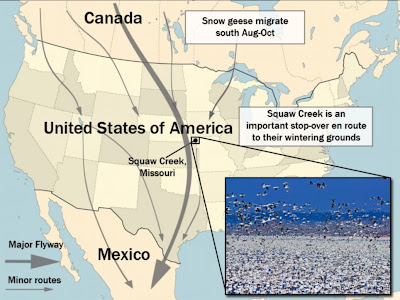 Like a blizzard filling the sky, these pictures show one of nature's most amazing displays as more than a million snow geese stop for a rest during their annual migration.
The spectacular shots were taken by Mike Hollingshead in Squaw Creek National Wildlife Refuge near Mound City, Missouri. The geese must travel 2,500miles twice a year.
Every autumn the snow geese head from their main breeding grounds in central Canada to their wintering grounds in the Gulf of Mexico. The noisy birds migrate in unusually large flocks of 100 to 1,000 that are made up of many family groups. Biologists still do not understand how the birds decide when to migrate. 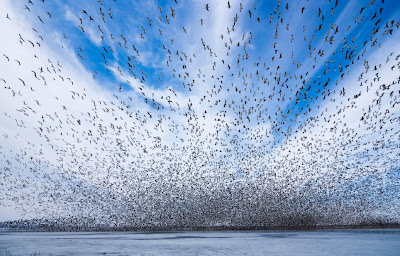 The birds manage to stay together in family groups numbering from 100 to 1,000 on their journey south from Canada
Male and female geese look very similar although the males are slightly bigger. Although a swirling flock of snow geese looks like falling snow, there are darker birds among the group. These blue geese, long thought to be a separate species, are simply a dark version of the same bird.
More than a million converge on the national park, which acts as an important stopover on the Central Flyway migration route. It is on one of the narrowest points of the migration route. 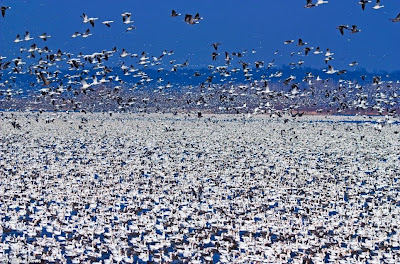 This year managers estimate 1.2million snow geese rested at the 11.5 square mile refuge. It used to be a private hunting area but now its wildlife is protected.
Some birds however have been recorded to make the entire journey without stopping for a rest - a flight of 70 hours.
.
Posted by The Man at 5:28 PM No comments: