Young boy rescued after taking on a dare from his sister

Firefighters were called to rescue a boy in Essex who was stuck inside a washing machine. Patrick Grieves, eight, from The Tythings, Halstead, got into difficulty on Monday evening after being dared to climb in by his sister Jade.
His worried mother, Susan, called Essex Fire and Rescue Service after she was unable to get his out. The fire crews managed to maneuver Patrick so they could get him out without having to cut up the machine.
Jade said: "He went in feet first because he knew that was the only way he could get in and I dared him to do it, so I am a naughty girl."I know I shouldn't have, but my mom has told me off so I have my punishment - grounded for a night."
Posted by The Man at 2:39 PM 1 comment: 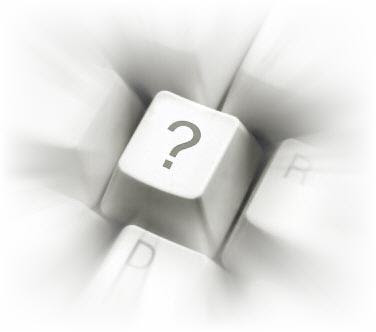 You throw away the outside.


You cook the inside.


You eat the outside.


You throw away the inside.

Boy gets hand trapped in plughole 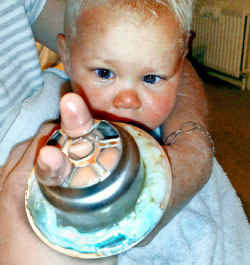 Toddler Harry Minshull took the plunge and poked his fingers into a plughole - only to find they were stuck.
Harry, who is just 16 months old, was being bathed at his grandparents' home in Royton, Oldham, when he pushed his fingers into the hole in the kitchen sink.
Grandparents John and Anthea struggled to free the youngster before dad Darren, a joiner, dismantled the waste section to try to free his son.
But the metal section of the plug still stuck around Harry's swollen thumb and finger, so Darren, 31, was forced to call in the fire brigade.
Four firefighters used metal cutters to free Harry, who had been stuck for more than an hour. Darren said: "We tried washing-up liquid but had to call the Fire Brigade. "They used 12in snippers to cut him free. Harry cried a bit but he was okay afterwards."
Posted by The Man at 2:27 PM No comments:

The Japanese introduction of bread in a can a few years ago seemed to cover all bases, being little, light and long-lasting.
Lunch and light snacks may never be the same again. 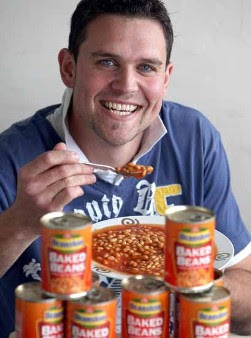 A Suffolk man lost six stone in six months on a diet of plain baked beans.
James Skeates, 28, has trimmed down from 21-stone to 15-stone by eating at least two large cans of beans a day.
The carpenter, of Haverhill, says he now has the energy to keep up with his young children Eleanor, three, and George, 10 months.
James joined his local Slimming World Class in March and lost around a stone a month to hit his target weight, reports the Cambridge Evening News.
James said: "I was getting through two tins a day, eating them in my breaks at work, then at home with jacket potatoes, wholemeal bread or pasta. I was never hungry, but the weight kept coming off.
"It didn't really cause me any problems eating all the beans, but now I suffered a bit more wind."
Isabel Hooley, a dietician for Suffolk NHS Primary Care Trust, said: "Baked beans are fine as part of a healthy, balanced diet, but we would not recommend more than one portion a day.
"Baked beans are low calorie, so if you eat them instead of cheese on toast for example, I would expect you to lose weight." 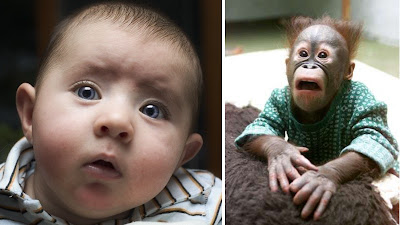 Is that the best that you can do?