It appeared to be a real emergency that hit in the middle of the night in Montgomery, New Jersey. It started when an alarm went off in a local bank, sending cops to the scene in a hurry. When they peered inside through the closed blinds, trying to see what might be going on inside the darkened building, they spotted someone inside.
They ordered him out, but he stubbornly refused to move, standing his ground, seeing to almost defy them to take him on.
The situation quickly became a tense standoff, as heavily armed police rushed to the neighborhood, sealing off the area and evacuating three apartment buildings in case things went wrong.
Specially trained SWAT officers pulled out bullhorns and demanded whoever was inside emerge. And still no one came out.
After numerous phone calls went unanswered, this dramatic robbery in progress took a final turn, as SWAT teams broke through the doors and stormed the bank, finally smashing through the locks.
And that's when they finally got their first look at the 'suspect' who caused so much commotion. It was a full-sized cardboard cutout of a person used for promotional purposes, left standing near the window.
Red faced cops quickly withdrew after realizing the cardboard man wasn't likely to do much more than give them a paper cut. But at least he didn't offer any resistance.
But this investigation still isn't over - authorities are trying to figure out what set off the alarm in the first place.
Posted by The Man at 4:56 PM No comments:

Thanksgiving on a Cupcake 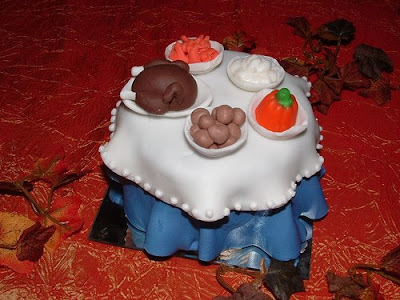 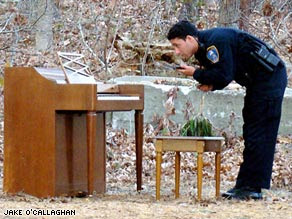 Was it a theft? A prank? A roundabout effort to bring some holiday cheer to the police? Authorities in Harwich, Massachusetts, are probing the mysterious appearance of a piano, in good working condition, in the middle of the woods.
Discovered by a woman who was walking a trail, the Baldwin Acrosonic piano, model number 987, is intact -- and, apparently, in tune.
Sgt. Adam Hutton of the Harwich Police Department said information has been broadcast to all the other police departments in the Cape Cod area in hopes of drumming up a clue, however minor it may be.
But so far, the investigation is flat.
Also of note: Near the mystery piano -- serial number 733746 -- was a bench, positioned as though someone was about to play.
The piano was at the end of a dirt road, near a walking path to a footbridge in the middle of conservation land near the Cape.
It took a handful of police to move the piano into a vehicle to transport it to storage, so it would appear that putting it into the woods took more than one person.
Harwich police have had some fun, though. Among the photos they sent to the news media is one of Officer Derek Dutra examining the piano in the woods. The police entitled the photo "Liberace."
Posted by The Man at 2:11 PM No comments:

Coco the parrot massages Lucky's head and face.
Both are curious about one another
.
Posted by The Man at 2:06 PM No comments: