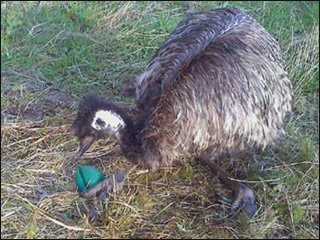 Friend the emu has been alone for 8 long years ever since his mate was attacked by a cougar. He's been around for 13 years, but just recently he took new interest in sprucing his pad.
He built what looked like a nest in the middle of his pen. When he got the nest just so, he lay on his nest and refused to get up.
When Friend finally budged, the owner saw a large green ball underneath him. From afar, it looked like an emu egg. Confused, the owner took a closer look and discovered that it was no egg at all; it was a ball that happened to be about the same size and color of an emu egg.
The ball likely accidentally landed in Friend's pen and his instincts likely took over. In the emu world, the mothers simply lay the eggs and the fathers take over from there. Friend has been so dedicated to incubating the egg, in fact, that he has been losing sleep and even losing weight, too preoccupied to eat. Friend's owner, Rebecca Akehurst, has been playing along, bringing Friend's food to him and trying to keep his strength up for the task. She's not quite ready to take away the ball because she fears it would break his heart. She's biding her time and walking on eggshells, hoping the lonely emu won't be too sad to discover his "egg" will never hatch. "It takes 40 days for an emu egg to hatch, and it hasn't been 40 days yet. So he hasn't been suspicious," Akehurst said.
Posted by The Man at 1:51 PM No comments: