.
.
It would take 1.2 million mosquitoes biting you simultaneously to drain all your blood.
.
.
Mosquito - The Little Blood Sucker
.
.
Mosquitoes are insects that have been around for more than 30 million years. And it seems that, during those millions of years, mosquitoes have been honing their skills so that they are now experts at finding people to bite. Mosquitoes have a battery of sensors designed to track their prey, including:
Chemical sensors - mosquitoes can sense carbon dioxide and lactic acid up to 100 feet (36 meters) away. Mammals and birds gives off these gases as part of their normal breathing. Certain chemicals in sweat also seem to attract mosquitoes (people who don't sweat much don't get nearly as many mosquito bites).
Visual sensors - if you are wearing clothing that contrasts with the background, and especially if you move while wearing that clothing, mosquitoes can see you and zero in on you. It's a good bet that anything moving is "alive", and therefore full of blood, so this is a good strategy.
Heat sensors - Mosquitoes can detect heat, so they can find warm-blooded mammals and birds very easily once they get close enough. Something with this many sensors sounds more like a military aircraft than an insect. That's why mosquitoes are so good at finding and biting you. As we'll see later, one of the only ways to stop mosquitoes from finding you is to confuse their chemical receptors with something like DEET. Like all insects, adult mosquitoes have three basic body parts:
Head - This is where all the sensors are, along with the biting apparatus. The head has two compound eyes, antennae to sense chemicals and the mouth parts called the palpus and the proboscis (only females have the proboscis, for biting).
Thorax - This segment is where the two wings and six legs attach. It contains the flight muscles, compound heart, some nerve cell ganglia and trachioles.
Abdomen - This segment contains the digestive and excretory organs. So you have a sensor package, a motor package and a fuel processing package -- a perfect design!
Little FlyThe word "mosquito" is Spanish for "little fly," and its use dates back to about 1583 in North America (Europeans referred to mosquitoes as "gnats"). Mosquitoes belong to the order Diptera, true flies. Mosquitoes are like flies in that they have two wings, but unlike flies, their wings have scales, their legs are long and the females have a long mouth part (proboscis) for piercing skin.
Posted by The Man at 2:15 PM No comments: 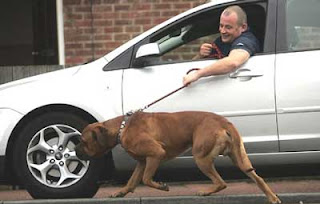 A father has been named one of the laziest men in Britain for walking his pet dog while sitting in his car.
Kevin Pyle, 35, gets his son to drive him slowly around the block and, with his arm stretched out of the window, holds a lead attached to his bull mastiff Bruce, who walks alongside.
He claims to cover around four miles a week but never does any walking himself.
He said: "It sounds terrible that I take Bruce for a walk like that, but it saves me from getting wet when it's raining. He really enjoys it and it saves my legs."
Now he's won the title of being the region's Great North Bum.
Mr Pyle, of Fenham, Newcastle, was nominated for the competition by his 18-year-old son Karl.
"My dad is the laziest person I know. When he gets in from work he has a bath and goes straight to bed. He just lies there and watches the TV," said Karl.
"He even shouts down the stairs for us to go up and turn the channel over for him. But even we couldn't believe it when he came up with the idea to take Bruce for a walk like that.
"Dad goes to work at around 4.30am to 5am and he gets me up so I can drive around the block while he holds Bruce's lead. He is so lazy and deserves the title."
Karl heard the competition to find the Great North Bum on Century Radio and nominated his dad without hesitation.
Competition bosses say he won by a landslide.
Posted by The Man at 8:24 AM No comments:

An 11-month-old baby answered a mobile phone to help raise the alarm when her mother collapsed.
Amelia Boyle picked up the ringing phone after her 20-year-old mother Elizabeth fainted at home in Braintree, Essex.
Grandmother Linda Wright, making the call, heard the baby say "Mama."
Realizing her daughter's history of passing out and having seizures, Mrs Wright feared something was wrong and called an ambulance.
Paramedics attended and found Miss Boyle had woken up, although she was in a confused state.
She was later told that her phone had been answered by Amelia and how her daughter had played such a vital role in getting help in the incident.
Joy Hale, of the East of England Ambulance Service, said: "We often hear of children who help their parents but this is one of the youngest we've been told about.
"The grandmother also did brilliantly in alerting the emergency services. Thankfully, the mother did not need hospital treatment."
Posted by The Man at 8:22 AM No comments: