Coyote catches the Road Runner
Posted by The Man at 11:21 AM No comments: 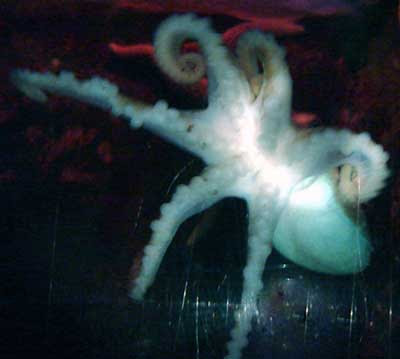 He is an octopus, but this new recruit at Anglesey Sea Zoo is a couple of legs short of the usual eight.
Staff had never seen anything like their six-legged arrival, and have christened him Henry the hexapus.
He was found in a lobster pot off north Wales, and they believe his shortage of limbs is the result of a birth defect, rather than an accident.
Henry will go on display with other octopuses in a new exhibition called Suckers at Blackpool Sea Life Centre.
Staff only realised his deficiencies, however, when he stuck himself to a glass display tank.
Displays supervisor Carey Duckhouse said: "We've scoured the internet and talked to lots of other aquariums and no-one has ever heard of another case of a six-legged octopus."
Henry is one of eight creatures of a breed known as "lesser octopuses".
He was found two weeks ago and taken to Anglesey, where his lack of legs was first spotted.
Octopuses need subdued lighting and flash photography can be fatal.
But a quick-thinking staff member snapped the best picture he could before Henry found a different resting place with his legs tucked beneath him. Octopuses are renowned for having three hearts, blue blood and the ability to alter their skin complexion in the blink of an eye.

These two kayakers got more than they bargained for on a trip to spot sea turtles off the Hawaiian island of Maui - winding up in the path of an anxious female humpback whale, surging out of the water to protect her young. 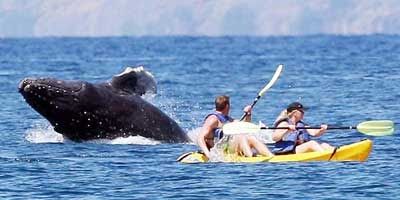 The female adult flapped her fin at the passers-by to warn them off, before coming up out of the water as the kayakers quickly escaped. Neither was hurt. 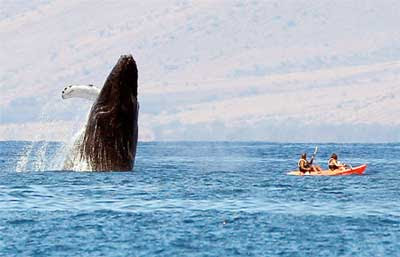 Humpback whales are not aggressive, but adults can reach up to 16 meters in length and 36,000 kilos in weight. More photos here.
Posted by The Man at 11:11 AM No comments:

Don't ask me how I got here! 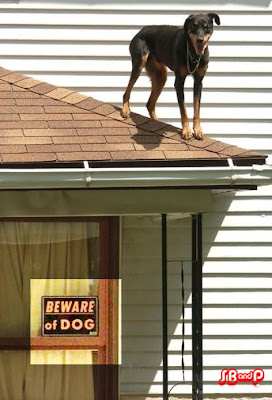 Iranian court orders 'stingy' husband to buy 124,000 roses
A "stingy" husband has received a court order forcing him to buy his neglected wife 124,000 red roses.The woman decided to claim her mahr, or dowry, after ten years of marriage as a way of punishing her husband's tight grip on the family purse-strings. "Shortly after marriage I realized that Shahin was very cheap. He even refused to pay for my coffee if we went to a cafe or restaurant," she said.A long-stemmed rose in the Islamic Republic costs 20,000 rials, or a little over £1 - so the full bouquet, if such a vast array can be so called, will weigh in at around £134,000. Iranian authorities have seized Hengameh's husband's apartment - worth 600 million rials or around £32,500 - until he has bought her all 124,000.The husband, identified as Shahin, denies the accusations of thriftiness. Claiming that he can only afford five roses a day, he complained that it was "her billionaire friends who had put such ideas in her head."
.
Boss bans smelly undies
The boss of a Serbian company has banned staff from coming into work with dirty underwear.
Milomir Gligorijevic said: "I am fed up with people with poor personal hygiene standards. I have now made it a sackable offence for people to come in without having a shower - or with dirty underwear."
He has also banned staff from smelling after eating garlic - warning that they need to make sure they brush their teeth - and use perfume and deodorant.
Gligorijevic, who runs a 30-staff stationery company in the capital Belgrade, sent out an official memo to all employees demanding they adopt good standards of personal hygiene.
The memo warned all employees to make sure they brush their teeth, take showers regularly and change their underpants every day.
He did not say how he would make sure his clean underpants rule was followed but warned it would be enforced.
.
Old dog's new tricks
An eight-year-old dog has picked up an astonishing array of circus tricks.
Cindy, a King Charles spaniel, can balance objects on all four paws while lying on her back.
She can also keep a golf ball in a spoon held in her mouth while balancing objects on her head.
Owner Mark Bucknell, from Wednesfield, in the West Midlands, said: "Who needs the TV when you've got a dog like this?"
He said the family started teaching Cindy tricks when they took her in as an eight-month old.
It took her six months to learn to wait for her reward but, despite having undergone two leg operations since; her circus skills have remained intact.
Mr Bucknell advised other dog owners to train their own pets: "You don't do the dog any favors if you leave it as a dumb mut," he said.
"Put the effort in, get your dog some intelligence, get it to understand you will have yourself a better, more fun dog."
Posted by The Man at 11:02 AM No comments: