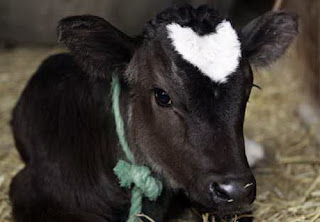 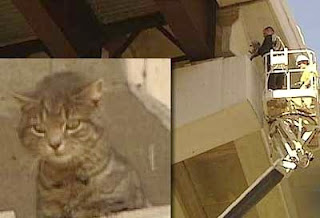 Rescue crews were called in to help a cat caught between 70 and 80 feet in the air.Blake McGee happened to be walking along the street around I-10 near the beltway when he heard a cat crying for help. He looked up and noticed the cat stuck in the small gap on a pillar which supports the overpass. That's about six stories high. McGee called the SPCA, who in turn contacted a company that has a cherry picker with a bucket. Together they were able to coax the cat closer with food and bring the scared animal down.
SPCA investigator Charles Jantzen says it appears the cat fell through an expansion joint on the freeway and landed on the pillar. The cat is being checked out by the SPCA. They say the animal is dehydrated and may have been stuck up there for quite a while. McGee, the person who first spotted the cat, says he will try to adopt the animal.
VIDEO
.
Posted by The Man at 4:19 PM No comments: 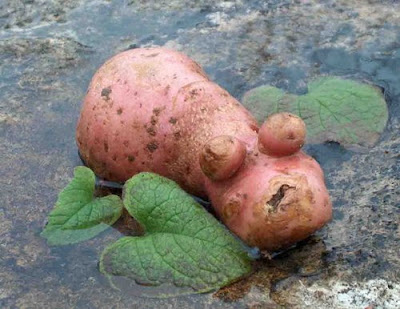 Central Appalachia is the number one spot in America for tooth decay to due to their poor diet, lack of access to dental care, and widespread addiction to Mountain Dew. They say it's used as a kind of anti-depressant, thanks to its high-caffeine and sugar levels. Good Morning America visited and found they even put it in baby bottles. Some 2-year olds have 12 cavities in their baby teeth. They discovered an 11-year old Dew-drinker boy who hadn't brushed his teeth in several weeks because they hurt too much. Crazy to think that's what acid, sugar and caffeine will do to your teeth when combined with a bad diet and little in the way of dentist visits.
VIDEO
.
Posted by The Man at 3:59 PM No comments:

Switzerland in the Winter 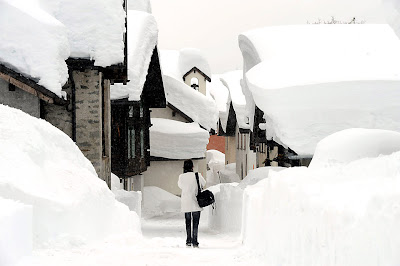 A woman walked through the snow-covered village of
Bedretto, Switzerland, after a heavy snowfall.
.
Posted by The Man at 3:55 PM No comments:

Daredevil dog up a tree 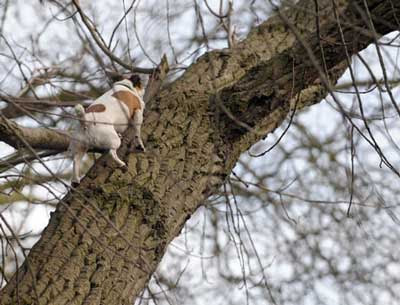 Maybe she’s trying to catch a cat or perhaps she’s looking for a bone.
But whatever the reason, this adventurous pooch certainly takes morning walkies to new heights by scaling a 30ft tree every day like clockwork.
Penny, the three-year-old Jack Russell, has a head for heights and loves nothing more than scampering up the trees at East Park, Wolverhampton, each morning.
Her owner, 68-year-old Gwen Lloyd, said Penny’s antics raise one or two eyebrows at the park.
She said: "It’s amazing what Penny does. People stop and stare as she climbs the tree. They can’t believe she goes so high. I have seen people taking videos of Penny going up the tree on their mobile phones."
Mrs Lloyd is used to seeing her pooch 30ft above the ground, as she’s been climbing the tree for more than two years.
She added: "She was only about six months old when she first started going up the tree. She’d go about halfway and then come back down, because she was scared.
"It’s only recently that she has carried on going until she’s almost at the very top. I think, as she has got older and probably a bit braver, she’s wanted to go further up than just the middle.
"I couldn’t believe it when I looked up and I could see her almost at the top. She was just a little dot sitting up that high."
Mrs Lloyd, a retired typist, has another Jack Russell – Jessie, aged five.
But Mrs Lloyd admits that Jessie has never been tempted to take a leaf out of Penny’s book and copy her amazing tree-climbing antics.
She said: "Jessie is nothing like Penny. She likes to keep her paws firmly on the ground. She’ll just stand there and watch Penny going up the tree."
Mrs Lloyd said she had no idea why Penny was so keen to scale the heights but said she was a very clever dog.
She added: "Penny is a little monkey but a very intelligent dog. She is extremely intuitive and just loves to climb."
Perhaps it could be something unusual in Penny’s diet, but Mrs Lloyd said that she only feeds her pets tins of dog food and on occasions they are treated to a dish of chicken and rice.
She said: "Maybe Penny could win talent shows in the future. I’m sure she’d impress on a show like Britain’s Got Talent."
.
Daredevil dog up a tree VIDEO
.
.
Posted by The Man at 2:31 PM No comments:

A lottery jackpot winner tried to cash her £7.4million ticket in a local shop.
The woman, who has not been named by Lotto operators Camelot, took the ticket into the store in Perth.
She had scooped the jackpot in last Saturday's rollover draw.
Yesterday Lorraine Ritchie, manager of the David Sands shop in Tulloch Square, said: "The person came in with her ticket but it wouldn't pay out so she was told to contact Camelot.
"It wasn't a regular customer but I have heard she lives round here."
It is believed the winner is from the Hillyland area of Perth. A Camelot spokesman confirmed there was one winner of the £7,479,590 jackpot on Saturday.
.
Posted by The Man at 2:28 PM No comments: