A 10-year-old boy from Alton, N.H. picking up litter in New Hampshire found a charred backpack stuffed with more than $8,000 in cash.
Arie Johnston of Dover was helping his grandmother with her town's annual roadside cleanup when he spotted the backpack Saturday. He told Foster's Daily Democrat his first thought was that a person had been killed for the money.
Arie's grandmother called the Alton town clerk, who identified the bag's owner based on the passports and other documents found with the money. The owner was a woman who had lived across the street until a fire damaged her apartment last year.
Police say the woman has since moved to Maine and has asked that her belongings be given to her sister who lives in Alton. Arie's grandmother says a reward may be forth coming.
.
Posted by The Man at 12:28 PM No comments:

The Canadian government is pressuring a couple to change the name of their baby.
The couple's 6-week-old son is named "Avalanche" and the Quebec Civil Registry said they should change it because it invites ridicule.
The government said they intervene when it's in the best interest of the child.
The parents said "Avalanche" is an impressive force of nature and they want to keep the name.
.
Posted by The Man at 12:26 PM No comments:

Now I can take them with me... 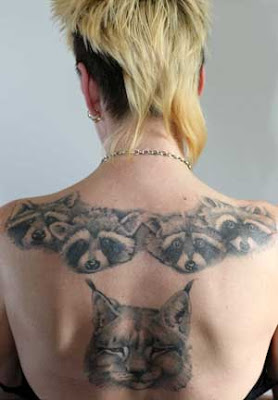 A terminally ill woman has thought of an unusual way to take her much-loved animals with her - she's having them tattooed on her body.
Jayne Jubb from March is passionate about animals. Along with her husband Alan, she takes in and cares for a variety of animals including cats, dogs, birds, raccoons, fish and snakes. Jayne is absolutely devoted to her animals, many of whom are sick, or came from rescue centers.
In 2007 Jayne was diagnosed with lung cancer and was told she had between 18 months and three years to live. Devastated by the news, one of Jayne's main worries was "what's going to happen to the animals when I die?"
Jayne's animals are so important to her that she decided to get them tattooed on her body. She says "when I go, my animals can come with me".
.
"Animals never let you down, they show their true feelings to you, they don't lie... people aren't like that."
Jayne Jubb
Posted by The Man at 12:18 PM 1 comment: