So Cute So Talkative 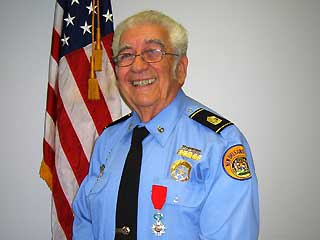 A New Orleans police sergeant who survived the D-Day Normandy invasion to battle criminals for 63 years in the city of New Orleans finally lost one to the bad guys last week — only hours after he died.
The burglars, two men and a woman, broke into Police Sgt. Manuel Curry's house Thursday morning and stole several rifles and a handgun, along with jewelry, money and medication, New Orleans police said.
Curry, 84, believed to be the longest-serving active-duty police officer in the country, died of heart failure hours earlier, according to The Times-Picayune.
His widow Genevieve "Jackie" Curry, whom he was married to for 51 years, was at a funeral home planning her husband's burial when she learned of the burglary.
"Oh my goodness. Who would do this?"
.
Posted by The Man at 6:47 PM No comments:

Child who wouldn't buckle up is sent to traffic class

A New Mexico five-year-old sentenced to traffic safety class after refusing to wear a seatbelt says he is reformed.
David Kirk-Peet completed the class Thursday and was handed a certificate.
He promised to buckle up, saying: "You want to get safe."
Magistrate Buddy Sanchez sentenced David and his mother to the class after an officer spotted the boy unbuckling his seatbelt earlier this year.
His mother received a ticket for failing to restrain him.
She asked the officer to speak to David about the importance of seatbelts because he constantly unbuckled.
The ticket landed her in Sanchez's courtroom, where she explained the problem.
.
Posted by The Man at 6:23 PM No comments:

Squirrel on a Mission

Bonus ending: vending machine raid!
.
Posted by The Man at 6:17 PM No comments: