Have you seen my Kringle

"I know he misses his toys," says the dog's owner Ann Loveless. Loveless is like many pet owners, she treats her dachshund "Kringle" more like a child than a pet.
Loveless explains, "When I took a shower, he took a shower. When I go to bed, he goes to bed. When I get up, he gets up. He's more than just a dog. He is my companion and I love him." 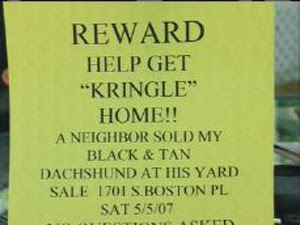 So, last Saturday when Kringle got out of his harness and into the streets, Ann panicked. Loveless says, "I started just driving around the neighborhood."
Ann saw a yard sale at a home a block away and asked if anyone there had seen her dog. "And he said, 'Yes, we saw your dog but we have no idea where he is'," Loveless says. Loveless didn't believe the man. That's when police got involved.

Officer Todd Winesburg says, "And we went down and talked to the people. They told us they had seen the dog, that it had run into the yard and out into the street and almost got hit by a car and that was the last time they saw it and they let us into the house to see if the dog was there and it was not."

A day later, the man running the yard sale called Loveless and left this message. "This is John Johns. ... I need to tell you what happened to your dog."
Loveless says, "And he said that he wanted to confess that he had sold Kringle in a yard sale." Johns wasn't home Monday, but his wife Debra explains how it went down, "We put him in the backyard and he was nipping through the fence at our neighbor's dog and my husband didn't like that and by the time I got out of the shower, he had sold the dog and gave the dog to this lady." Debra Johns says both she and her husband feel terrible about what's happened. Debra explains, "I said John what you did was wrong, ethically wrong."

Police say Loveless could press charges but instead she just wants her dog back.

Loveless says, "I just want whoever has him. I'm not gonna ask any questions. I just want them to bring him home, please."

The Johns say they're helping put up flyers and traveling around to other yard sales to see if they spot the person they sold the dog to. Loveless and the couple are also offering a $200 reward for Kringle's safe return.

A Chinese grandmother has a five inch horn growing out of her forehead.

The horn curves downward and looks like the stalk of a pumpkin, reports the Yangcheng Evening Post. 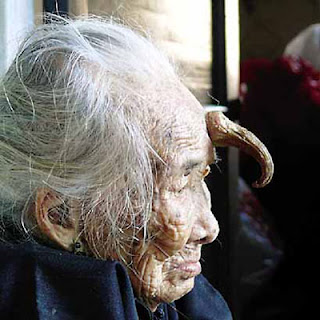 "At first, it was only a mole, but it gradually grew and became like a horn," she said.

Zhao says the horn causes her little trouble except to affect her vision slightly: "It causes me no discomfort, but blocks part of my view."

But her family is hoping that medical experts can explain the phenomenon.
Posted by The Man at 9:46 AM No comments: