Man cuts down 122 trees to get sea view 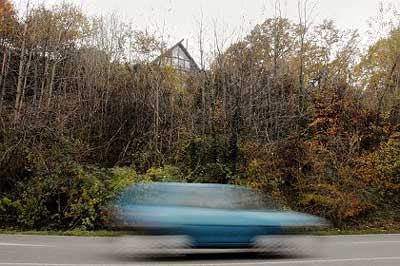 A German pensioner has cut down dozens of trees to get a better view of the Baltic Sea from his coastal home. Officials are calling him a Grinch Who Stole the Forest and want to prosecute him. Neighbors, though, are asking what all the fuss is about.
Unhappy with the obscured view at his property near the Baltic Sea coast, the man struck back at nature - with a chainsaw. Police reported that the 80-year-old man admitted to having illegally cut down 122 trees because they obstructed his view of the coast at his vacation home in an expensive part of the town of Scharbeutz near Lübeck in northern Germany.
The police investigating the crime said the tops had been cut off of 66 beech, ash, oak and wild cherry trees and that an additional 55 had been sawed to the ground completely. All of the trees were over 30 years old. The local forestry office is estimating damages at €15,000 ($22,000).Meanwhile, prosecutors are exploring their options for charging the man for property damage and violating both state and federal nature conservation laws. However, some local neighbors have come his defense "Maybe he got a bit carried away with 120 trees," said one neighbor, who asked to remain anonymous. "But what's all the fuss about?"
Posted by The Man at 3:13 PM No comments:

The 15 lucky pups being fed by two 'mothers'

These lucky pups have landed on their feet after two dogs decided to share out the motherly duties.
Pedigree Irish Setter Madyson gave birth to the 15 babies but before owner Julie Murray had a chance to clean the newborns, her other dog, Liliana, started to lend a hand.
And when the pups started feeding, six-year-old surrogate mum Liliana, an English Setter, also began producing milk so she could share the load. 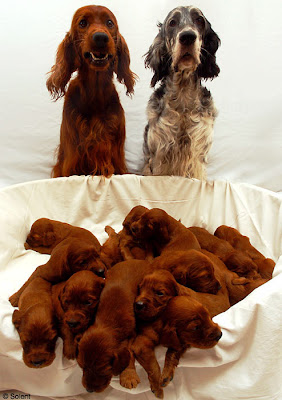 Lilliana (right) has been helping mother Madyson look after her litter of 15 since the day they were born
Julie, 53, from Waterlooville, Hampshire, said: "Madyson was giving birth so fast I didn't have time to wash them all, but Liliana was right there.
"She started cleaning them and looking after them and soon after began producing milk even though she wasn't pregnant - I was amazed.
"Normally the natural mum is really protective over her pups but the pair share feeding times. 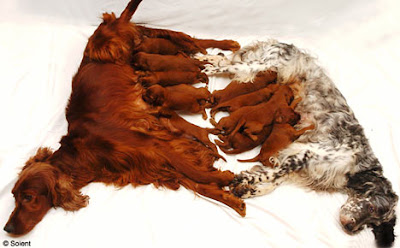 If Liliana wasn't willing to lend a hand at feeding time owner Julie would have to bottle feed some of the pups
"It's good news for me too because if Liliana wasn't there I would have to help and bottle feed some of the puppies because 15 is too many for a mother to look after.
"But with Liliana there I can just put my feet up - with 15 mouths to feed it's certainly a big help.
"The puppies are still very young so they haven't reached the mischievous stage.
"People think that Irish Setters are a bit mad but these puppies are actually very laid back and relaxed.
"When they get a little bit older they will be just as playful as any other breed of dog." 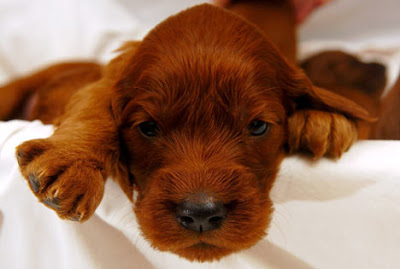 Lucky pup: The litter of red setters have two mums to feed and take care of them
Portsmouth City Council kennel assistant, Carol Plumbly, said: "It is certainly an oddity.
"It appears like Liliana is having a phantom pregnancy and her body has started acting as if she has given birth.
"To happen with a domestic dog is very rare."
Moira Launchbury, from the South of England Irish Setter Club, said: "It's a lovely story to hear of two dogs sharing their duties.
"It's certainly quite unusual for an Irish Setter mother to let another breed of dog help out like this.
"I'm sure it helps deal with 15 puppies, which is quite an impressive litter."
Pedigree four year old Madyson has scooped a host of awards including prizes at the world famous Crufts dog show.
The puppies' father, three year old Irish Setter Louis, has also won prizes including being crowned best of breed by the Gun Dog Society of Wales.
Here's what readers have had to say so far. Why not add your thoughts below?
Great pictures, beautiful dogs.- Jacqui Weems, Southampton
What adorable animals they are!- Amy, Elizabethtown, Pennsylvania, USA
I own an English Setter they are simply delightful animals; no aggression whatsoever...
Posted by The Man at 3:06 PM No comments: