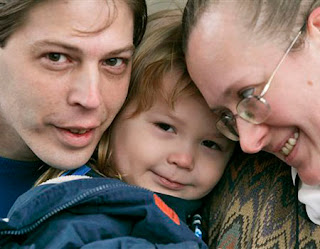 EASTON, Pennsylvania — The father of 3-year-old Adolf Hitler Campbell, denied a birthday cake with the child's full name on it by one New Jersey supermarket, is asking for a little tolerance.
Heath Campbell and his wife, Deborah, are upset not only with the decision made by the nearby ShopRite, but also with an outpouring of angry Internet postings in response to a local newspaper article about the cake.
Heath Campbell, who is 35, said in an interview Tuesday that people should look forward, not back, and accept change.
"They need to accept a name. A name's a name. The kid isn't going to grow up and do what (Hitler) did," he said.
After ShopRite refused the request for the cake as inappropriate, the Campbells got a cake decorated at a Wal-Mart in Pennsylvania, Deborah Campbell said.
About 12 people attended the birthday party on Sunday, according to Heath Campbell.
The Campbells' other two children also have unusual names: JoyceLynn Aryan Nation Campbell turns 2 in a few months and Honszlynn Hinler Jeannie Campbell will be 1 in April.
Heath Campbell said he named his son after Adolf Hitler because he liked the name and because "no one else in the world would have that name."
Campbell said his ancestors are German and that he has lived all his life in Hunterdon County, New Jersey, which is across the Delaware River from Easton.
.
Posted by The Man at 6:03 PM No comments:

Why You May Not Want To Own A Wii 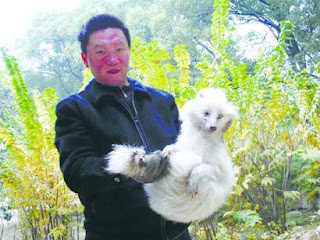 A Chinese man was shocked to discover the dog he had raised from a pup was actually a rare Arctic fox.
Zhang, of Tunkou, bought what he thought was an all-white Pomeranian dog for £60 a year ago on a business trip.
But he found the dog hard to tame, it would often bite him and had several unusual traits.
"It can't bark but instead makes little 'em em' noises, and its tail has been growing longer and longer," he said.
"The most annoying thing is that starting this summer, the dog became very smelly. Even when we gave it a daily shampoo bath, the smell was still strong."
Zhang took his 'dog' to a local zoo for answers, and it turned out the dog is actually an Arctic fox, a protected rare species.
He has now donated the animal to the zoo.
.
Posted by The Man at 4:29 PM No comments: