'Oldest man' passes away in India 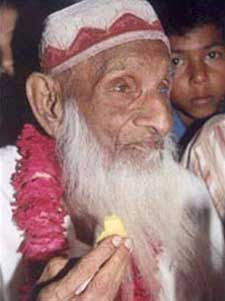 .
.
An Indian man reported to be the oldest in the world has died in the western city of Jaipur. Habib Miyan's pension papers showed his date of birth as 20 May 1879, but he claimed he was 138.
Mr Miyan lived in a Muslim neighborhood of Jaipur with 32 relatives. He claimed to be 138 (his pension book said 129). He lost his vision 50 years ago and had limited mobility for many years. He had been drawing a pension since 1938.
Posted by The Man at 7:58 AM No comments:

Yoda the Cat With Four Ears 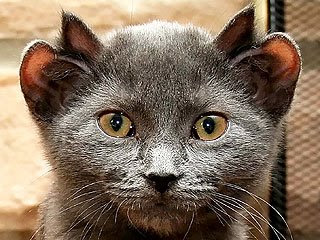 They say cats have nine lives, but this one has four ears.
A genetic abnormality gave Yoda, of Downers Grove, Ill., four ear flaps instead of two.
Ted and Valerie Rock first spied the little guy in 2006 at neighborhood bar on the South Side of Chicago before a Bears game. He was the last of a litter of eight put up for adoption by the bar's owner.
Their "Star Wars"-loving son thought to name the cat after the tiny Jedi master.
The abnormality can cause hearing impairments, though Rock said several veterinarians have given Yoda a clean bill of health.
"He is perfectly normal, hears well, energetic, cute little cat," Rock said. "Very friendly, very social."
The only thing these retirees worry about is a possible catnapping of their curious pet.
Posted by The Man at 7:54 AM No comments: