I'm not the most energetic of people.
After all I'm a guy, "I'm not lazy. I'm just energy efficient". In fact, few people know but if you look up couch potato in the dictionary it has a picture of me. 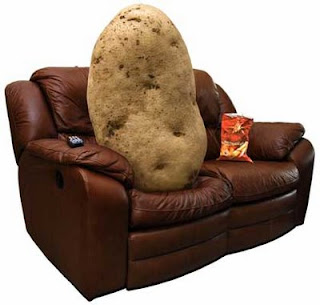 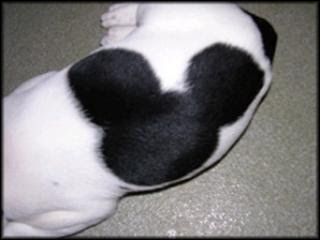 .
Look at this little guy! Perhaps he was trying to find his way to Disney World, but he was found right in St. Pete! This little puppy has a black spot, and it looks just like the Mickey Mouse ears. They couldn't be better, even if they were drawn by Walt Disney himself.
He needs a home, and he's in custody of St. Pete's animal shelter. They're calling him "Petey." He'd make the perfect pet for any Disney fan, that's for sure!
Posted by The Man at 12:31 PM No comments:

George W Bush has turned down his first chance of a new job since leaving the White House - at a hardware store in Dallas.
Elliots store manager Andrea Bond said the former US president entered the Elliott's outlet with his security detail saying "I'm looking for a job.".
The owner of the Texas chain had made the offer earlier this month in a letter published in a Dallas newspaper, reports the BBC.
But despite not yet having a publisher for his memoirs, Mr Bush decided on reflection to turn the job down.
Equipped with a name tag reading 'W', Mr Bush spent an hour there with his secret service security detail, chatting to customers and shopping.
Described as part-time, the job would have left Mr Bush time to work on his presidential library and write about his two terms at the White House.
"We're confident that your experience working in your own family business, as well as your people skills developed throughout years of meeting with foreign dignitaries would make you an excellent candidate for the position," read the job offer, signed by Kyle Walters, president and CEO of Elliott's Hardware.
"Furthermore, like you, many of our greeters are retired from the corporate world, so we're sure you'll have no trouble making new friends."
The employment package also offered parking for his security detail and an employee discount.
"We think you'll find working with us much less stressful than your last job," the offer continued.
Posted by The Man at 12:27 PM No comments:

That's why I kept finding the phone off the hook.

Dog and a Mirror