Dog with a phobia of men left stranded

A dog with a phobia of men was stranded for two nights at the foot of an 80ft cliff after refusing help from male rescuers - until a female RSPCA officer was called in to winch him to safety. 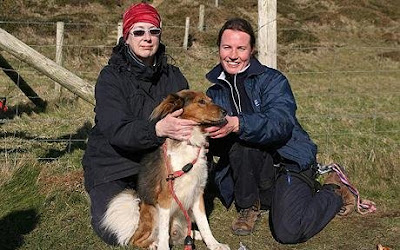 Rescued Fox the dog with owner Jane Ravine and rescuer Marije Zwager
Hope was fading that Collie-Huskie cross 'Fox' would be pulled out alive after he growled, barked and backed away from a string of male coastguards who were unsuccessfully winched down to try and save him.
Until, that was, his owner revealed where they were going wrong.
Jane Ravine, 58, said Fox had a hatred of men, so a female RSPCA officer was scrambled to try her luck.
And having touched down in the cove, Fox gleefully jumped into her arms and was safely returned home, shaken but unharmed.
The 13-year-old dog, named after his love of chasing foxes, tumbled over the edge after chasing one along a knife-edge coastal cliff path in Bude, Cornwall, on Tuesday.
He landed unscathed, but was trapped on an inaccessible pebble beach that was too dangerous for rescuers to reach by sea.
Male officers were winched down but every time they hit the ground Fox refused to go anywhere near them and they refused to take him by force for fear of being bitten.
After several failed attempts over 48 hours, Marige Zwager (corr), 31, a Dutch-born member of the RSPCA's cliff rescue team, was called in.
Armed with dog biscuits, she hit the ground, and Fox leapt into her arms, licked her face and wolfed down the biscuits. Within minutes, the pair were pulled to safety.
Mrs Ravine, from Morwenstow (corr), Cornwall, said: "I'm so relieved. It was a horrible ordeal while Fox was down there.
"He just doesn't like men very much which isn't normally a problem unless you are stuck down a cliff and men are trying to save your life.
"In the end a woman went down. She did a great job rescuing him from such a difficult spot and I'm very grateful to everyone involved.
"Hopefully this will stop him chasing things from now on. He might just have learned his lesson. He is an old dog but has a strong spirit."
Miss Zwager said: "Fox is very nervous of men and when the coastguards went down it wouldn't let a male rescuer anywhere near him.
"I abseiled down with a colleague and took some dog biscuits to coax him to me. He was cold, scared and hungry but my female charms worked.
"I've never been called in just because of my gender before but Fox really doesn't like men very much at all."
A spokesman for the RSPCA said: "The dog was very wary of men so we have made sure there are two women in the team who could go down."
.
Posted by The Man at 8:23 AM No comments: 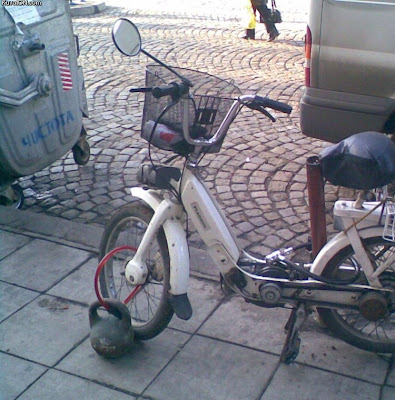 No wonder there's a basket added to carry all extras
.
Posted by The Man at 8:17 AM No comments: