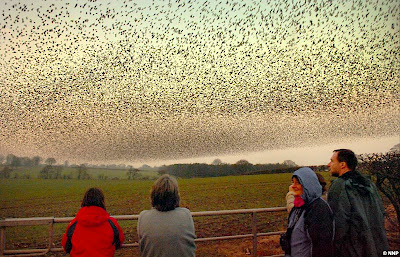 These amazing pictures show thousands of starlings flocking to the famous village of Gretna Green - as tourists look on in amazement.
The birds fluttered overhead, turning the sky black above the village which is notorious for runaway weddings.
The event is a seasonal phenomenon and birdwatchers come from miles around to catch a glimpse of the amazing skies.
More photo's


Gretna Green is a small but thriving town on the west coast of southern Scotland.
Posted by The Man at 2:42 PM No comments:

You can do puzzles -- it times you and compares your time with the times of others. Click here for the puzzles.
.
How Many Orange Slices in a orange without unpeeling it.
.
Marriage Proposal Gone Bad.
Posted by The Man at 7:08 AM No comments:

A cat tries to catch a fish in a frozen pond

A parrot deflating a bicycle tire

Chair that keeps its feet on ground 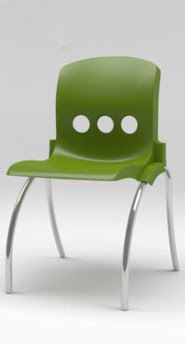 It’s dangerous and it drives teachers to despair. But now the problem of pupils rocking on the rear legs of their chair has been solved: a former teacher has developed an untippable one.
Tom Wates has taken orders from 18 schools since launching his product three weeks ago. “I’ve had orders from Glasgow to Belfast, Cornwall to London,” he said. “It seems that it’s a problem that touches everyone.”
Mr Wates, who gave up his job teaching maths and PE in Blackheath, southeast London, last year, said that he was “driven mad” by his students rocking back and forth, and often falling off their chairs. “It was something I was saying as much as I was asking children to be quiet. I couldn’t do anything about them talking, but I figured that I could stop this.”
Of the 7,000 pupils admitted to hospital a year as a result of chair-related accidents, 70 per cent resulted from rocking back dangerously, according to government statistics. 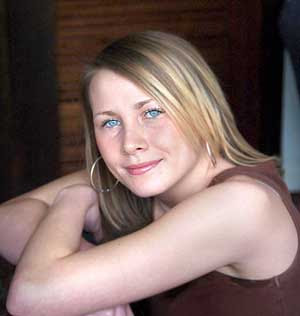 A teenage girl who recently discovered she has four kidneys is hoping to be able to donate two of them to patients desperately in need of a transplant.
Laura Moon, 18, from Whinmoor, Leeds, is one of a tiny number of people to have four of the organs growing naturally. She only became aware of her unusual anatomy six months ago after undergoing an ultrasound scan to investigate stomach pains following a car crash. 'I realized that the doctor scanning me hadn't said anything for a long time. I thought he was going to give me bad news.
But then he said: "You've got four kidneys." He measured them and I have two which are 14cm and two which are 9cm.'
Consultant urological surgeon Dr Robyn Webber, of Fife Acute Hospitals, said many extra kidneys are fully functional, meaning Laura should be able to donate. He added: "It is a relatively rare condition. Ordinarily they are left alone unless the patient is suffering any problems. But Laura will be able to manage perfectly well with two so assuming they are working correctly there is no reason why she shouldn't donate them."
Posted by The Man at 5:00 AM No comments:

USDA Recalls 143M Pounds Of California Beef.
.
How corn is quickly becoming the new crude.
.
Authorities Evacuate L.A. Airport.
.
Welcome to the town that will make you lose weight.
Posted by The Man at 4:51 AM No comments: