Rock dust is at the root of a garden fortune 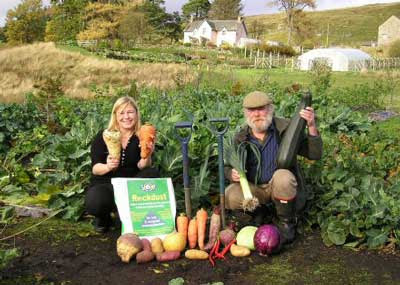 A couple who transformed the infertile soil of their Perthshire croft by adding rock dust to it have developed the process into an export business. Former schoolteachers Cameron and Moira Thomson saw their first shipment of the crushed quarried rock leave Scotland for Slovakia on Friday.
The Thomsons' once-exhausted land now produces football-sized cabbages, massive onions and normally delicate fruits the size of a fist. 'The dust we use has more than 78 minerals and trace elements, and that benefits the produce,' said Moira Thomson, who with Cameron set up the center for Sustainable Ecological Earth Regeneration (Seer) in 1997. 'It's been said that we need to eat five apples to get the same nutrients we used to get from one apple 40 years ago. But when we had one of our carrots analyzed and compared with a shop-bought one, it had 10 times as many nutrients.'
Cameron Thomson said using rock dust mimics the earth's glacial cycles. 'Modern soils are relatively barren and artificial fertilizers are needed, but rock dust accelerates that natural weathering process,' he said.
.
ECO-FRIENDLY GARDENING AND FARMING WITH ROCK DUST
.
Posted by The Man at 9:14 AM No comments:

Maru slides into the box
.
The Amazing Spider Kitten
.
Posted by The Man at 9:08 AM No comments: